Listen to this poem in Dutch.
Voiced by: Graziella Raiz

In the grand scheme of things, a human life is small: that is what Eb (Low tide) is about. M. Vasalis wrote it when she stayed at home to look after the children, and was pestered by the feeling of growing old and was confronted with death. Did she find comfort in the idea that nature constantly renews itself? Her sea illustrates that even though something disappears, there is always something in return.

Want to know more? On this website you can listen to the poem, discover its origins and its author, and find out what the poem means to the people of Leiden.

When Kiek Leenmans wanted to publish her first poems in the magazine Groot Nederland in 1936, the editors did not allow her to sign her work with her initials. Four years later, in the 1940s, her first poetry collection was published. Back then, she worked as a psychiatrist in Amsterdam.

Vasalis grew up in The Hague and Scheveningen where she could see the sea and the dunes from her own bedroom window. Nature and the sea often return in her work, as in the poem Eb. She studied medicine and anthropology in Leiden and subsequently worked as a child psychiatrist.

During World War II, Vasalis dedicated herself to the resistance. Personally, the war years were quite heavy. Her son died of polio in 1943, and in that same year her husband, professor of neurology Jan Droogleever Fortuyn (1906 - 1999), had a psychosis.

M. Vasalis published only three collections roughly containing one hundred poems. With this relatively small oeuvre she won a number of important prizes, influenced a large number of poets and reached a large audience: her first collection of Parken en Woestijnen (Parks and deserts, 1940) sold over 100.000 copies.

What’s this poem about?

“The crux of the whole collection is the transition from nature to the ‘human landscape,’” is what Vasalis wrote to her publisher about the collection of poems Vergezichten en gezichten (Vistas and faces), in which also includes the poem Eb (Low tide). In other words, she investigates the difference and similarity between culture and nature. What does Vasalis’s sea show us?

According to one interpretation of the poem, M. Vasalis investigates her own aging. In the period she wrote this poem, she had stopped working and focused on motherhood. Could this have been the resigned waiting of which “every minute turned into future,” namely the future of her children? It was a lifestyle that did not really suit her and made her suffer from depressive moods, which may be reflected in a formulation such as the “absorbing low tide of the mind.” However, the high tide could also emerge from this.

Perhaps this poem is not about her personal experiences, but more about humanity in general. Every life is finite, but generations always follow one another, just as low tide is always followed by high tide.

The poems M. Vasalis wrote around the 1950s were collected in Vergezichten en gezichten (1954), which also includes the poem Eb (Low tide). She wrote Eb probably in 1953, not long after she moved to Groningen where her husband became a professor. From a personal point of view, it was not an easy period for her: the northerners were not very cordial; she had to get used to the fact that she had stopped working; and her father died shortly after she had had a miscarriage.

The title of the collection refers to how Vasalis wrote her poems: she had ‘to be carried away,’ to experience something or see very intensely - faces, vistas - to be able to write about it. A kind of ‘mystical’ experience preceded all her poems.

When the collection was published, Vasalis was forty-five years old and she had already noticed that such experiences were less easily achieved. Partly because of this, and due to deaths in her social circle, themes such as adulthood, old age, time and death are seen as the central thread of this collection - themes which also play a role in the poem Eb. As result, this was the last collection she published. 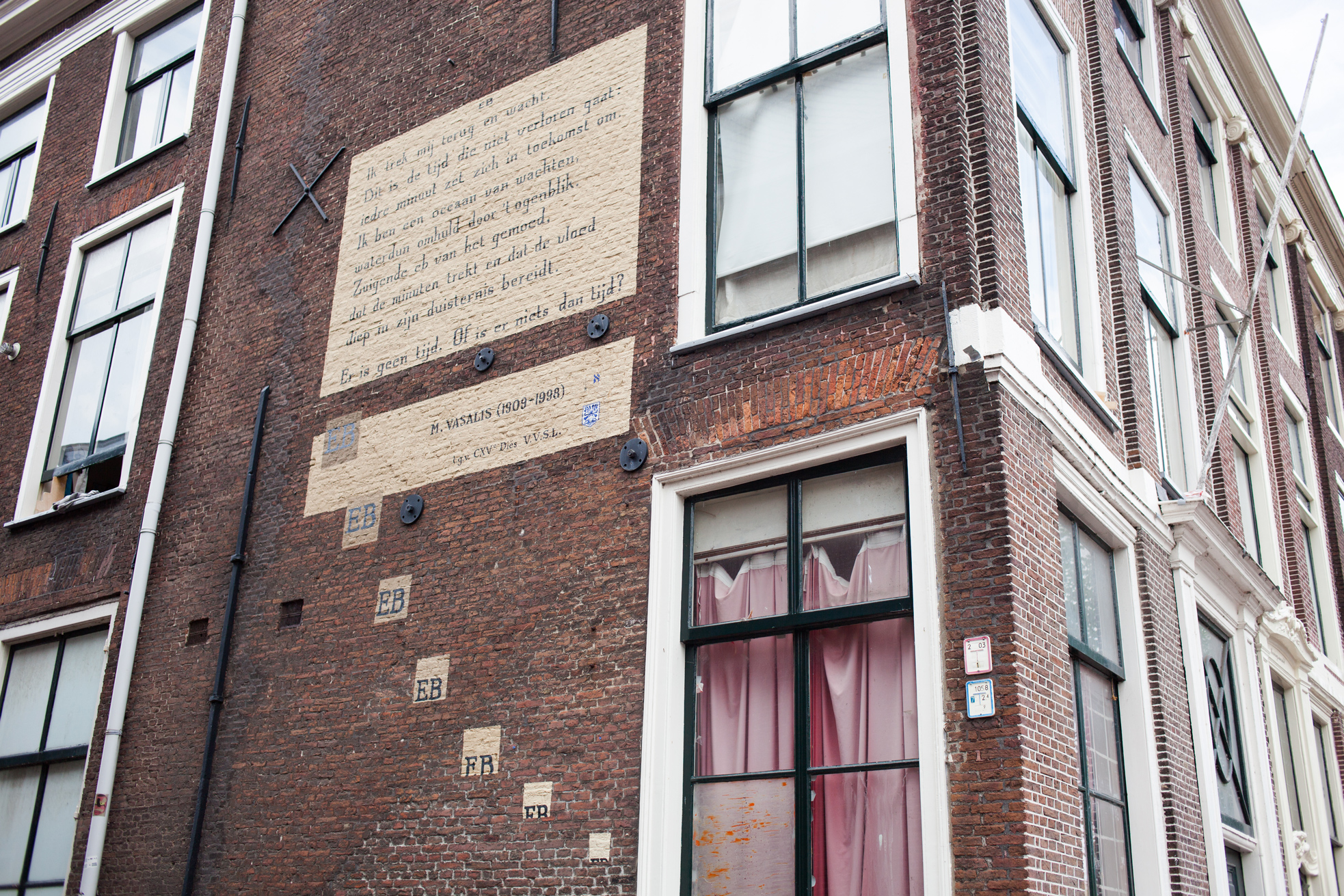 In 1927, Vasalis came to Leiden at the age of eighteen. She started studying medicine, just like her sister Ank did one year before her. They did not only share the same study, but also the same room when they lived at Lijsterstraat 36 .

Directly in her first year, Vasalis joined the Vereeniging van Vrouwelijke Studenten te Leiden (VVSL, a sorority in Leiden), where she got actively involved. Men and women were still in separate societies then; in 1973 VVSL and Minerva continued as one student corps.

In 2014, Josine Heijnen, a theology student at Leiden University, got involved in the organization of the 115th Dies Natalis of V.V.S.L. She met Ben Walenkamp, the initiator of the Leiden wall poem project, and suggested to paint one of Vasalis’ poems on Rapenburg, as the Clubhouse of V.V.S.L. was located there once. Together, they chose the poem Eb. In the signature, the logo of V.V.S.L. can be found as well as an Aleph, the first letter of the Hebrew alphabet which Josine chose as her signature.

Vasalis worked as a child psychiatrist and had a great interest in the human psyche. An important theme in many of her poems is the tragedy of mental illness. The poem De idioot in het bad (the idiot in the bath), with which she debuted in 1936, is probably the best-known example of this. In the poem, Vasalis describes how a man is bathed by a nurse. The poem is beautiful and tragic at the same time. Out of the bath the man is an idiot, but in the water he revives, once a week:

With hunched shoulders, narrowed eyes,
Almost trotting and often catching the mat,
Ugly and awkwardly bent to nurse’s arm,
Every week the idiot goes to the bath.

And every week he is born again
And cruelly separated from the safe water life,
And every week the bitter fate has befallen him,
To remain a frightened idiot once again.

Her poetry is of significance in the field of psychiatry because it so aptly represents what kind of patients psychiatrists work with.

In the beginning, words have a magical effect: from a sea of sounds and rhythms, suddenly a few occur which work and are applauded and repeated, just like a child who can barely walk and point.

I do not have to go to foreign countries at all, because this is it. All people who are just like me, but a little different.

Vasalis later explained her decision to continue with medication and stop ethnology.

For five days and five nights, I have been passionately trying to dedicate my life and my health to the precious little man, and then he went his own way in only fifteen minutes, while we were sitting with him and trying to hold onto him.

Vasalis about the death of her son during World War II.

I retreat and wait.
This is the time that is not lost:
every minute is transposed into future.
I am an ocean of waiting,
water-thin enclosed by the moment.
Absorbing low tide of the mind,
which ebbs the minutes and which deeply
prepares the high tide in its darkness.

There is no time. Or is there nothing but time?

This entry was written by Taalmuseum in collaboration with Emmy Stevens. The translation into English is by Rianne Koene. The following publications were consulted: