Listen to this poem in Flemish.
Voiced by: Els Bogaerts

Flemish poet Jotie T’Hooft lived a short, but intense life. His 21 years of life were filled with drugs, sex, music, a fascination for death and, particularly, writing a lot of poetry. Before he committed suicide, he wrote down how he viewed a poet: someone who can turn the smallest, silliest subjects into gold.

When Johan, commonly known as Jotie, was only three years old, it was clear that he had a flair for language. He corrected his school teacher, who spoke about a kitchen on a boat, by saying this was called a galley. Many small and big conflicts with teachers would follow, T’Hooft was expelled several times, because he had a lot of trouble complying with the rules. He took refuge in writing poetry and in books by authors such as Franz Kafka and Herman Hesse and in music. He also used drugs such as weed, LSD and speed from a very young age and he was already addicted at the age of 14.

T’Hooft paid for his drug addiction by working many jobs, including pop journalist, and writing many poems on the side. After a failed suicide attempt at the age of 17, he ended up in a reform school. Afterwards, he got married to the daughter of a publisher, who published his first collection of poems. However, T’Hooft relapsed into old habits and added a fascination for magic and the occult.

T’Hooft was fascinated by death. When he was ten years old, he collected animal skulls and shells, he fittingly called them the houses of dead animals. During the night of 5 to 6 October 1977, T’Hooft committed suicide at the age of 21, by taking a cocaine overdose.

In this poem, the author reflects upon his own life as a poet. The first line clarifies that the poet never stops writing poetry. It is not a nine-to-five job, it is a calling. In the second line it becomes clear what a poet does exactly, transforming everyday experiences into something special. This is also the essence of a good poem: through the words of a poet, an everyday experience becomes a piece of art. The final line of the poem explains what a good poem should always be: self-explanatory, so that the poet’s explanation is not necessary.

The added motto from the song New York State Of Mind by Billy Joel could be a reflection of the idea of Jotie’s suicide: he did not have a specific reason, but it also more or less suited his image that was connected with dark romanticism, in which death played a central role.

During the night of 5 to 6 October 1977 in a room in Brugge, Jotie T’Hooft died at the age of 21 of a cocaine overdose. He had written a few words of farewell on the walls, and he had played the song The End by The Doors. In his house, which was painted entirely black, twelve farewell poems lay on the mantelpiece, together with the permission to publish them posthumously. The farewell message started with the poem that can now be found on one of Leiden’s walls. 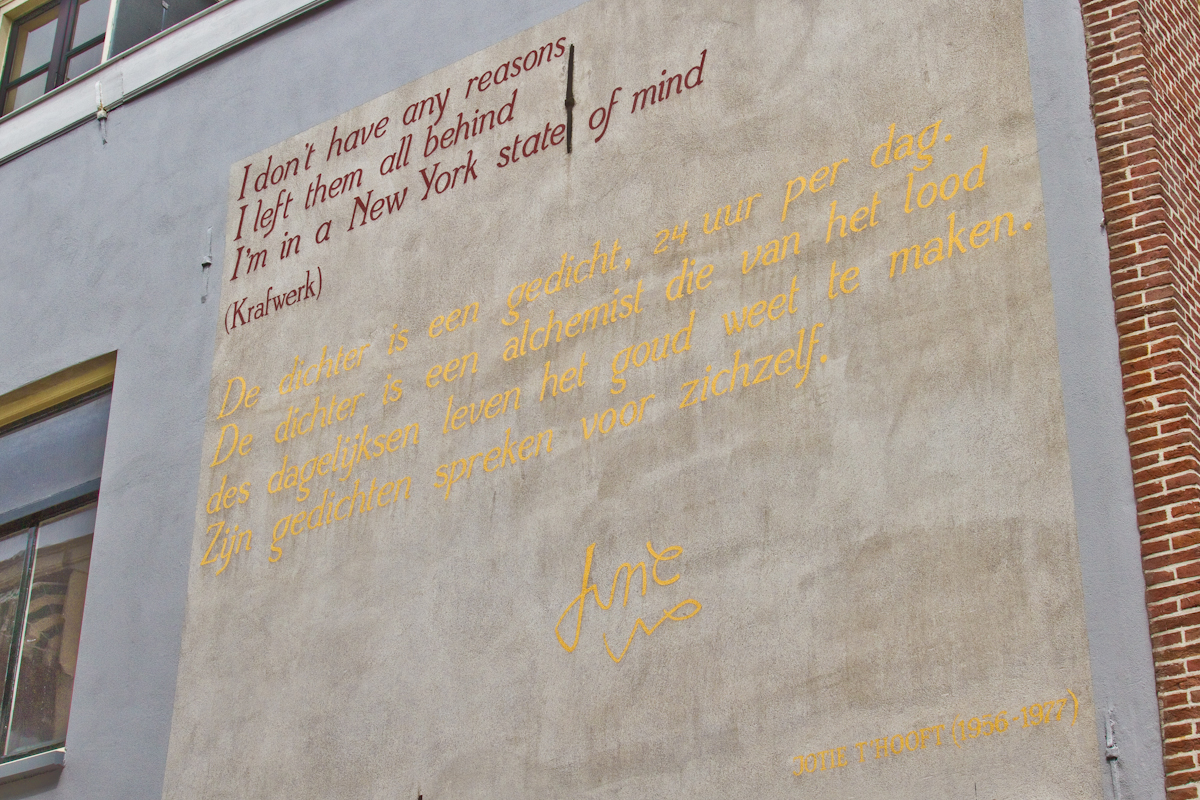 This poem can be seen at Rapenburg 91 in Leiden since 1993 . It was the fourth poem realized by TEGEN-BEELD Foundation. It was painted after the opening page of the collection of poems De laatste gedichten (The final poems). The motto is depicted, just as it is on this page, consisting of a few lines of Billy Joel’s New York State Of Mind. The collection wrongfully attributes the motto to ‘Krafwerk’, probably a reference to the German band Kraftwerk. The reason for this is unclear.

The poem itself is also a motto, preceding the final poems. Jotie T’Hooft’s signature is placed underneath.

... and also draw your own conclusions; after all, I’m not the maid

Jotie T’Hooft in Het einde van de wereld nabij (‘Near the end of the world’), part 1.

The poet is a poem 24 hours a day.
The poet is an alchemist who knows
how to turn the lead of everyday life into gold.
His poems speak for themselves.