Listen to this poem in the Basque language.
Voiced by: Leticia Pablos Robles

Bi blueri buruz is a musical tribute to the Basque language. Sarasola combines his passion for music with his wish to put Basque on the map. Whoever would take a look at the status of the Basque language in 1969, would soon feel blue: education in that language was forbidden, publications were discouraged. Sarasola’s blues is aimed at the future. He himself would help form this: his years of effort have contributed to the reappreciation of Basque.

Ibon Sarasola grew up in San Sebastian, called Donostia in Basque. He is a writer, poet, linguist and professor of Basque language and culture.

The fight for recognition and encouragement of the Basque language, Euskara, were a recurring theme throughout Sarasola’s career. From the 1970s, he was a driving force behind the academic Basque dictionary and since 1988, he is a member of the Academy of the Basque language. He also published about lexicography, dialectology and the history of Basque literature, such as poetry, essays and narratives.

In 2017, Sarasola published Bitakora kaiera, an essay in which he shared his vision on the past, the present, and especially the future of the Basque language. Sarasola acknowledged it is exhausting and vain to hold on to ideas of the past when your surroundings are changing. ‘Back when we united the language, we were a small, highly disciplined group, who worked under the yoke of a dictatorship that wanted to put an end to the Basque language. We must let go of these ideas.’

Besides his passion for Basque, Sarasola is a music lover. He often incorporates musical influences in his work. The large variety of different musical styles often shows the versatility of an era. In general, his work is experimental.

Sarasola often adds a musical feel to his poems. Here as well, he chose to give his poem a ‘musical’ title: About the blues. The blues originates from the American plantations, as the music of the oppressed. It is also characterized by the melancholic tones and content. That feeling is expressed in this poem as well. It is not obvious that the young Sarasola had a very melancholic view on life. Rather, the blues relates to Basque self-awareness, for which there was hardly any space.

Most blues songs follow a standard chord scheme. Sarasola was inspired by this; the poem reads like a blues song. It also has more or less the same structure. It raises a question, plays with the answer and ends with a twist: joan egin nintzela, ‘I move on’. This twist is not melancholic, but is aimed at the future: it is tongue in cheek blues. Do not hold on to the past too tightly; go on and follow your own path, seems to be the conclusion.

Even though the Basque language was centuries-old in 1969, at the same time it was virgin territory in many ways. Academic research was still in its infancy, no academic dictionary existed yet, there were many local differences and no clear standard Basque language. ‘A Basque writer sometimes feels like he is the first one walking on fresh snow,’ said writer Harkaitz Cano in 2015. ‘It may be harder to step on, but the fact that you're creating, with your own footprints, your path and tradition, can be extremely exciting too.’ Sarasola must also have thought that when he wrote this poem.

From 1936 until his death in 1975, general Francisco Franco (1892 – 1975) ruled over Spain. He strived for unity and banned the use of languages such as Basque and Catalan. It was hard to teach or publish in these languages. But not impossible: in 1969, Ibon Sarasola published his first poetry collection, Poemagintza. It includes this wall poem. He was 23 years old when the collection appeared.

Sarasola devotes himself to the promotion of the Basque language, Euskara. Scholars consider this an isolated language, meaning it is not related to other European languages, virtually all of which find their roots in Indo-European. The Basque language is an important part of Basque identity, expressing itself through a wish for autonomy or their own state.

Theater maker Erik Siebel interviewed house owners about the poems on their walls. Listen to the interview with the owner of this house: ‘I never thought I would live in a house with a poem on it…’

So, it has the name of the writer on it, Ibon Sarasola, and he is born in 1946 and then there is a nice little dash. A number has to be put behind it once the man has passed away. I wonder: does someone keep track of this? Or – I only think of this now – do I have to do that myself and who will come paint it when the man suddenly dies?

We were looking for a house in a 10 minute bicycle radius of the train station (that was a criterion), and it had to be a family home. We lived in the city center and wanted to live bigger, there was also a baby on the way, and we ended up here. Fairly quickly, whenever we were talking about it on the phone, we talked about that house on Funda with the poem, because that is very defining of a house. And even before, I really liked the poems, but I never thought I would live in a house with a poem on it. It was not the reason why we chose it, but I did really like it.

What is really convenient, is how to tell friends and acquaintances where you live, because you can simply say you live in the house with the poem. I never thought of it that way, but it is super convenient when you give people instructions: ‘yes, with the poem’, ‘oh, okay’.

Besides - I mean, I think it is magnificent - I also think beautiful to look at, but I also think the text is beautiful. The text is about someone who comes and then leaves again and the text has been placed by the previous owner, who came and left again after eighteen months. He had bought the house, new, but already left within eighteen months. The contrast is very beautiful, because I have lived in many places and have never lived anywhere this long. So, in some way I think that is very beautiful of the content of the poem, because it really says ‘that I came by/ looked around / and moved on’, but I am still here. I travel a lot for work, but I always come back, so I find that very beautiful about this poem. It actually is some kind of contrast of how I live here.

That you first think ‘oh, how fun, I have a house with a poem and that is convenient for people who visit’, especially in the beginning, because then you are explaining to everyone where you live. Up until people are standing in front of your house with cameras and at a certain time you start thinking more about the text and you think: ‘oh my, how do I live here?’ and suddenly the text means something. So, that happens when you live in a house with a poem.

It also gives zest to a city, it makes it special. I travel a lot, but many acquaintances of mine from other countries also come here and they all say ‘oh my, such a beautiful project’. Of course, it is very special, so many, this size, and I think it could be even more in the neighborhoods outside the city center. 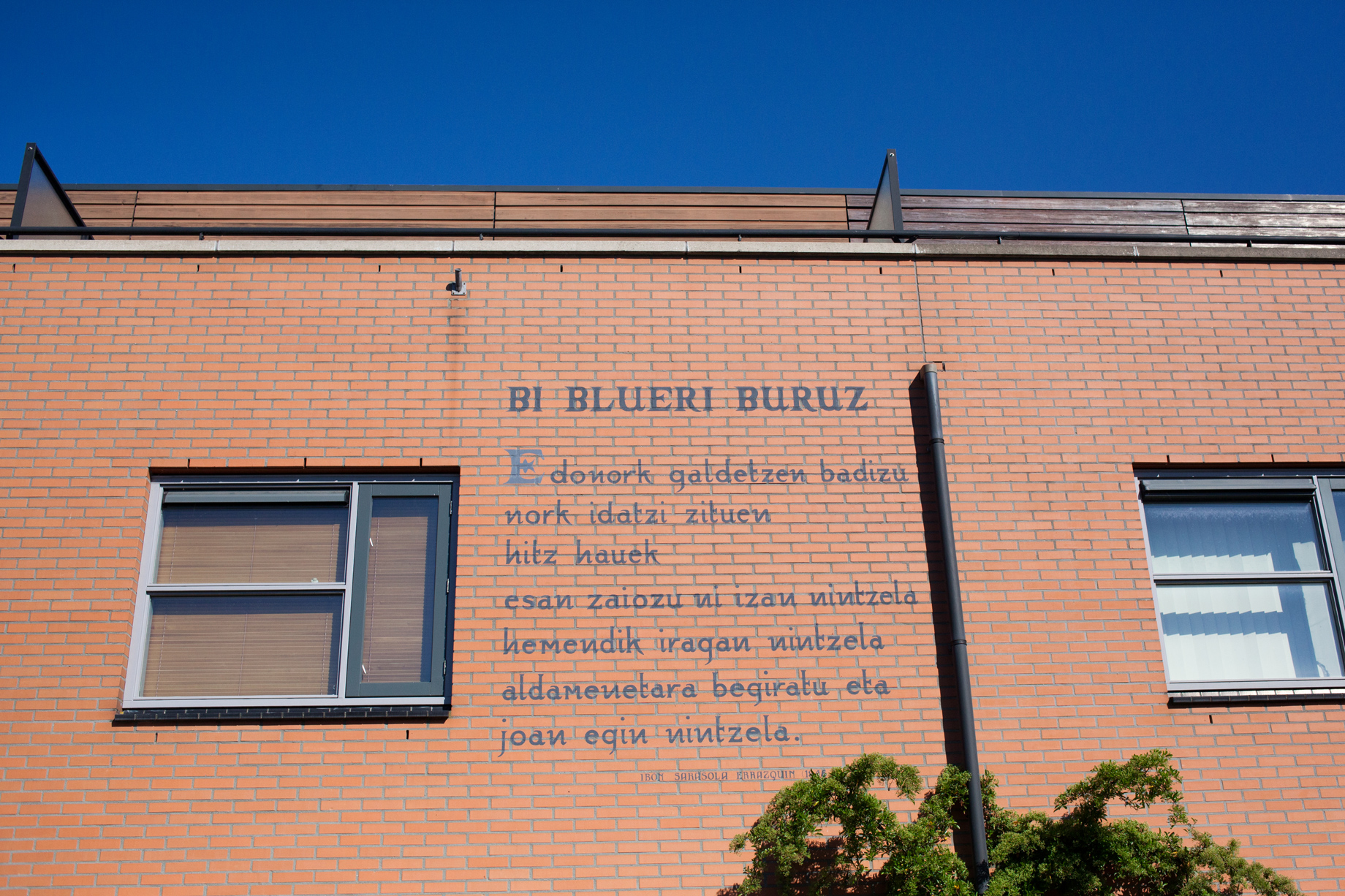 This wall poem can be found at the Multatuliplein in Leiden since 2003. It was the 92nd wall poem that was realized by the TEGEN-BEELD Foundation. It was chosen by the residents, as beautification of their home environment. They picked the robin as the poem’s signature. Painter Jan-Willem Bruins created a new font for this poem. He made the capital E catch everyone’s eye.

The language has changed enormously since we started making the complete Basque dictionary in 1980. Many new words have been added and many fell into disuse

The aim of language is communication

Spelling is a cultural tool

All languages are 'made up languages', only Basque is made up more recently than others. Besides, a language is a living organism that changes every day

We're few, yes, but more than in Iceland, for instance, where they have an amazing music and literary scene with only 300,000 people… Not having our own state somehow exaggerates the perception of our smallness in the world

If anyone should ask you
whoever wrote these words
you tell them
it was me
that I came by
looked around
and moved on.

Translation: Jasmijn van Dongen, based on the Dutch translation