On a nice summer’s eve, Leiden resident Cees van Hoore is cycling to the village of Koudekerk through the countryside commonly called ‘het Groene Hart’ (the Green Heart). During this bike ride, he is inspirited by the beautiful nature surrounding him. In this poem, Van Hoore gives the reader the opportunity to experience this bike ride for themselves. Look through the eyes of Van Hoore and see the poetry of the countryside pass you by.

Cees van Hoore is a journalist, art editor and writer of columns and short stories who settled in Leiden in 1983. That same year his first collection of poetry called Groot Licht (big light) was published. Van Hoore was awarded the incentive prize of the Dutch Foundation for Literature. Since then he has published around twenty books: collections of poetry, collections of stories and columns, and the romance novel Zo’n vader (such a father). Readers of his work call it associative, analytic and creative.

In his works, World War II plays a prominent role. Van Hoore tracked down war criminals and wrote dozens of articles about the war, the Holocaust, and the great art theft of De Lakenhal, which is now a museum.

Van Hoore’s recent poetry is extremely personal. In it, he discusses his battle with cancer and the effect of the drug dexamethasone on his body and soul.

In this poem the reader is looking through the eyes of Cees van Hoore at the countryside surrounding Leiden. As he is cycling, new scenes continually appear: “Ditches filled with green palettes,” “Shirts whoop in a back yard,” “The wind rakes its coarse-toothed comb through the grass.” These are scenes that cannot exist in reality: shirts do not whoop, and we are not sure if cattle can feel “resigned.” Van Hoore conjures up the landscape as he experienced it before your mind’s eye.

The poem Avond op het land (Country evening) is a visual narrative of a lovely bike ride. Van Hoore: “the poem came to me after a long bike ride from old Leiderdorp to Koudekerk aan den Rijn. In Koudekerk I turned left into ‘het Groene Hart’ (the Green Heart) and there I saw the flashes of a television behind a farmhouse window, and I heard the sound of the sprinklers.” 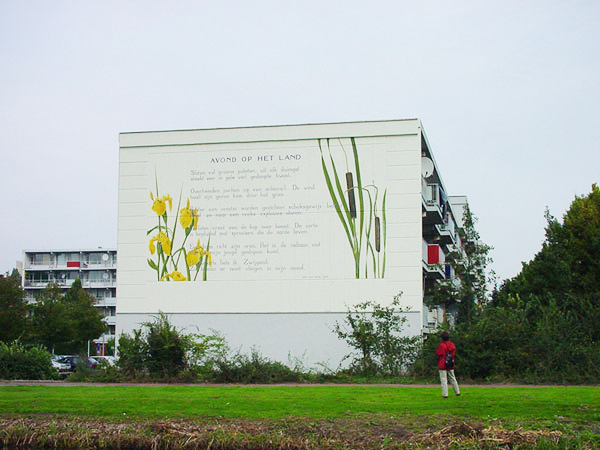 This poem is a poetic account of scenes experienced in the surrounding area of Leiden. It was applied to the wall at Kiekendiefhorst 1 in 2000, but unfortunately it has not withstood the test of time. Also depicted were a yellow iris and cat’s tail, flowers Van Hoore encountered on his bike ride.

A second poem by Cees van Hoore was placed on Leiden City Hall in June 2014. This is a collage of six different texts in which the phrase ‘Het Woord is Machteloos’ (The word is powerless) stands out. Van Hoore himself is more proud of the poem Avond op het land (Country evening) than the collage on City Hall.

I think I am first and foremost a realist who, with his work, wants to create the illusion for the reader that there is more than just flesh and bone.

Ditches filled with green palettes; from each thumb grip
Sticks a brush dipped in yellow paint.

Shirts whoop in a back yard. The wind
Rakes its coarse-toothed comb through the grass.

Behind a window faces are lit up by fits and starts
As if they sit staring at a string of explosions.

Resigned, cattle feed, heads down. The far distance
Is plumed with sprinklers that slake the earth.

A hare points its ears. It is not the indian
Who comes stalking from my youth.

I cycle home. Mute.
This way flies never get into my mouth.

This entry was written by Het Taalmuseum in collaboration with Carolien Devilee. The translation into English is by Natasja Oorthuis. The following publications were consulted: