Listen to this poem in Portuguese.
Voiced by: João Carvalho

Is there such a thing as ‘original work’, or is everything that is created a reference to or inspired by something else? In this poem, Álvaro de Campos wonders where inspiration comes from. Are the beautiful verses he wrote truly his? That question was a remarkably relevant one in this case, as Álvaro de Campos only existed in the mind of Fernando Pessoa, who invented multiple alter egos that each had their own writing style.

The Portuguese writer Fernando Pessoa (1888 - 1935) created multiple fictional characters which each had a distinct style and personality. Alberto Caeiro, for example, was a positivist and Ricardo Reis was a self-centered hedonist. His third well-known heteronym, Álvaro de Campos, was born in the port town of Tavira in the Algarve, according to Pessoa. He would have had an education in engineering and ended up in shipbuilding. While Pessoa hardly ever left his hometown Lisbon anymore, Álvaro de Campos traveled the world. This was one of the reasons why this heteronym was probably Pessoa’s favorite. In any case, his work is the most vivid of the three main alter egos.

Fernando Pessoa started off writing in English, and only began writing in Portuguese after a few years. This is because his father died when he was five, and shortly after his younger brother passed away too. His mother subsequently remarried the Portuguese consul in Durban, South Africa. Pessoa graduated high school there and returned to his native country when he was seventeen. In the meantime, he had become fluent in English, French and Portuguese and started working as a freelance translator. His lifestyle was sober and he worked only two days per week; the remainder of his time he spent in bars or at home, often taking up his pen.

Pessoa aspired to become a world-famous writer. He did not manage to during his life; only a small number of his poems was published. After his death, his heirs discovered a trunk with close to 30,000 pages: stories and above all many poems, written by dozens of heteronyms. Today, Pessoa is considered the most important Portuguese poet of the 20th century. Both in Portugal and Brazil, his influence is big.

This poem is about authorship. Álvaro de Campos considers his own work and wonders whether it is entirely his. He experiences a distance, as if he was not really present when the words were put on paper. Did the inspiration actually come from him? Or was he only a pawn, a middleman?

It seems justified that Álvaro de Campos wonders about this: after all, he only existed in Fernando Pessoa’s mind. By posing as De Campos, Pessoa assumed a different identity which allowed him to write substantially different poems. So where did the inspiration come from exactly? It is something every writer wonders about every now and again, and Pessoa probably did so on a regular basis.

Álvaro de Campos wrote this poem on 18 December 1934, a year before his ‘inventor’ Fernando Pessoa passed away. Earlier in that year, Pessoa had published the collection Mensagem (‘Message’) under his own name, in which he scrutinized the Portuguese history in 44 poems. 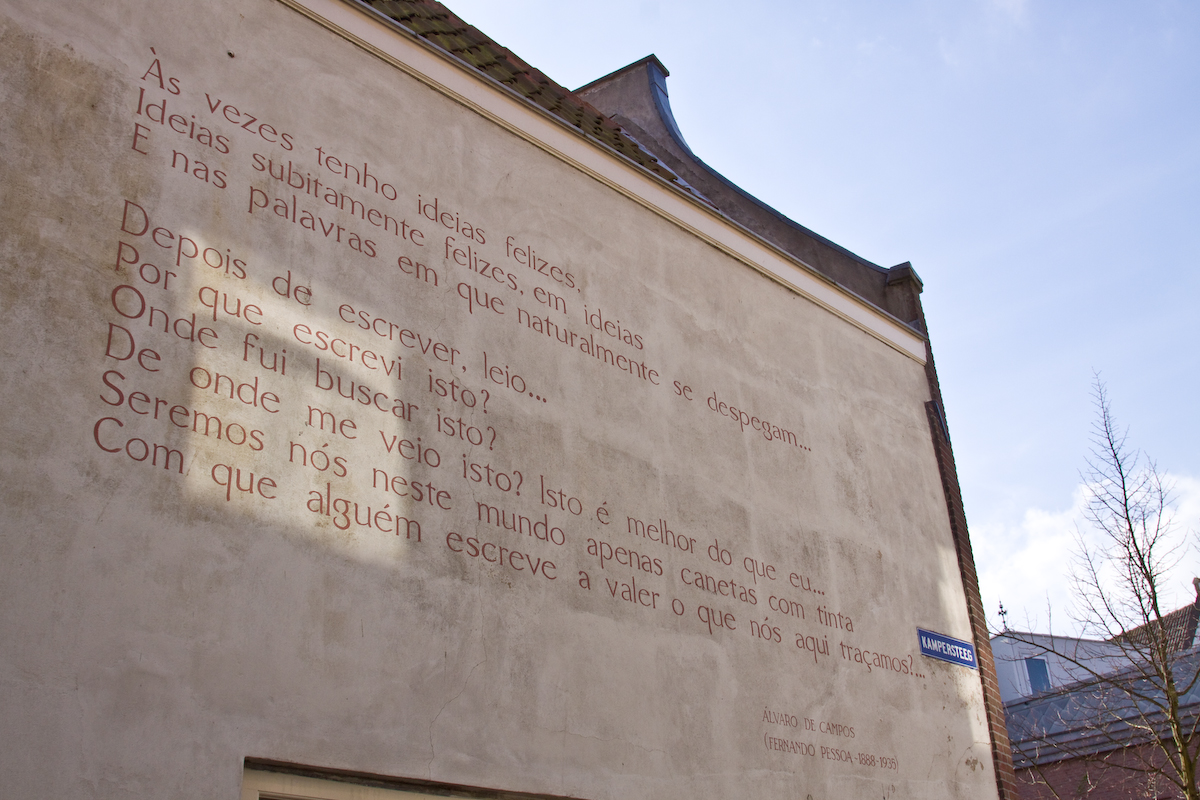 The poem Às vezes… can be found in Leiden since 1993, at Vliet 46 on the corner of the Kampersteeg. It was the 15th wall poem realized by the TEGEN-BEELD Foundation.

I have more than just one soul, there are more I’s than I myself.

At times I have happy ideas,
Ideas suddenly happy, in among ideas
And the words in which they naturally shake free ...

After writing, I read ...
What made me write that?
Where have I been to find that?
Where did that come to me from? It is better than
me ...
Shall we have been, in the world, at the most, pen
and ink
With which somebody writes properly what we here
jot?...

This entry was written by Het Taalmuseum. The translation into English is by Emma Knapper. The following sources were consulted: