Listen to this poem in French.
Voiced by: Céline Zaepffel

In 1922, when Robert Desnos wrote this poem, he was infatuated with Surrealism. This cultural movement posed that art was created when you unleashed your subconscious imagination. Desnos used this in this poem, which seems to be centered around arithmetic or simply calculus. However, the poem is actually about language. The digits do not represent numbers, but the sounds of words. If you read them out loud the meaning of the words in the poem become clear. The poem is a play on sound and meaning.

Robert Desnos, like many young people from a petty bourgeois environment, sought something more adventurous during his adolescence. When he was sixteen, his father made him choose between a life in the trade of game and poultry or going out on his own. He chose the latter. This proved fruitful: within a couple years he had become a prominent Parisian artist.

Desnos drew his inspiration not only from famous poets such as Baudelaire, Rimbaud, and Apollinaire but also from comic books, adventure stories and movies. He wrote poetry as well as film scripts, reviews and journalistic pieces. From 1930, his voice could also be heard on the radio.

In 1940, after the Nazi’s had occupied Paris, Robert Desnos got involved with in the illegal rebelliance network Réseau AGIR. He kept publishing his works under different pseudonyms until he got caught by the Gestapo and was sent to Auschwitz on 22 February 1944. Early May 1945, he was moved to Theresienstadt, where he eventually died in barracks that served as an infirmary on the 8th of June.

At first sight, this poem seems absolute chaos. Luckily, the title proves helpful in revealing a little about the content of the poem. Art rythmé; tic might be tricky to read but is effectively just arithmétique, or arithmetic. Arithmetic is done with numbers, which are used repeatedly throughout the poem. At first, they seem to be chosen at random, until they are pronounced and reveal a new meaning. In the first line, “Prenez vos 16”, becomes Prenez vos aises, which means ‘make yourself comfortable’. The sequence 10-20-2-20 in French sounds like the words divins devins meaning ‘divine fortune teller’. But what does it mean?

This poem is not so much about the meaning of words but about how they sound. Reading this poem might give the impression that Desnos has just put his mind to paper in an extremely chaotic way, which may well be the case. It may seem like nonsense but it is anything but - this you discover when you start listening. Sometimes the sounds are similar such as in “treize fraises” (thirteen strawberries) as well with “onze ondes” (eleven waves), “litanie” (prayer) and “N’Italie” (not Italy). Not only the sounds but also the letter play a big role in the poem, turning the seemingly meaningless sequence F M R F I J into éphémère effigié, or ‘fleeting image’. With this sound landscape, Desnos paints a mental picture.

Take for instance the final line. Like the rest of the poem, it is all about sound: Cowboys / cobayes, l’arizona / l’horizon sound almost the same in French. This lesson in arithmetic might have left the audience of Robert Desnos confused for days: are we cowboys from Arizona in a laboratory or are we guinea pigs who take the horizon to be a labyrinth?

In 1922, Desnos reached the age of 22 and had fulfilled his military service. In Paris, during that time, Surrealism was up and coming. Followers of this movement felt that art was something that should come from one’s subconscious, from the dream world, for instance. Creativity was all about unfiltered emotions: the artist had to break loose from elements that were considered limiting, such as logic, rules, and traditions. Desnos joined the movement and wrote this poem in the same year.

Like much Surrealist poetry, this poem was meant to be read out loud. This was done on so-called ‘poetry nights’, where it was all about association: the language of one poet influenced the thought processes of others, who immediately shared their poetic responses. Poetry was above all a collaborative affair in which multiple poets took to the stage together. It is therefore striking that Robert Desnos was praised by his peers for his verbal qualities, as in for example Manifeste du Surréalisme (Manifest of Surrealism, 1924). He left a great impression. 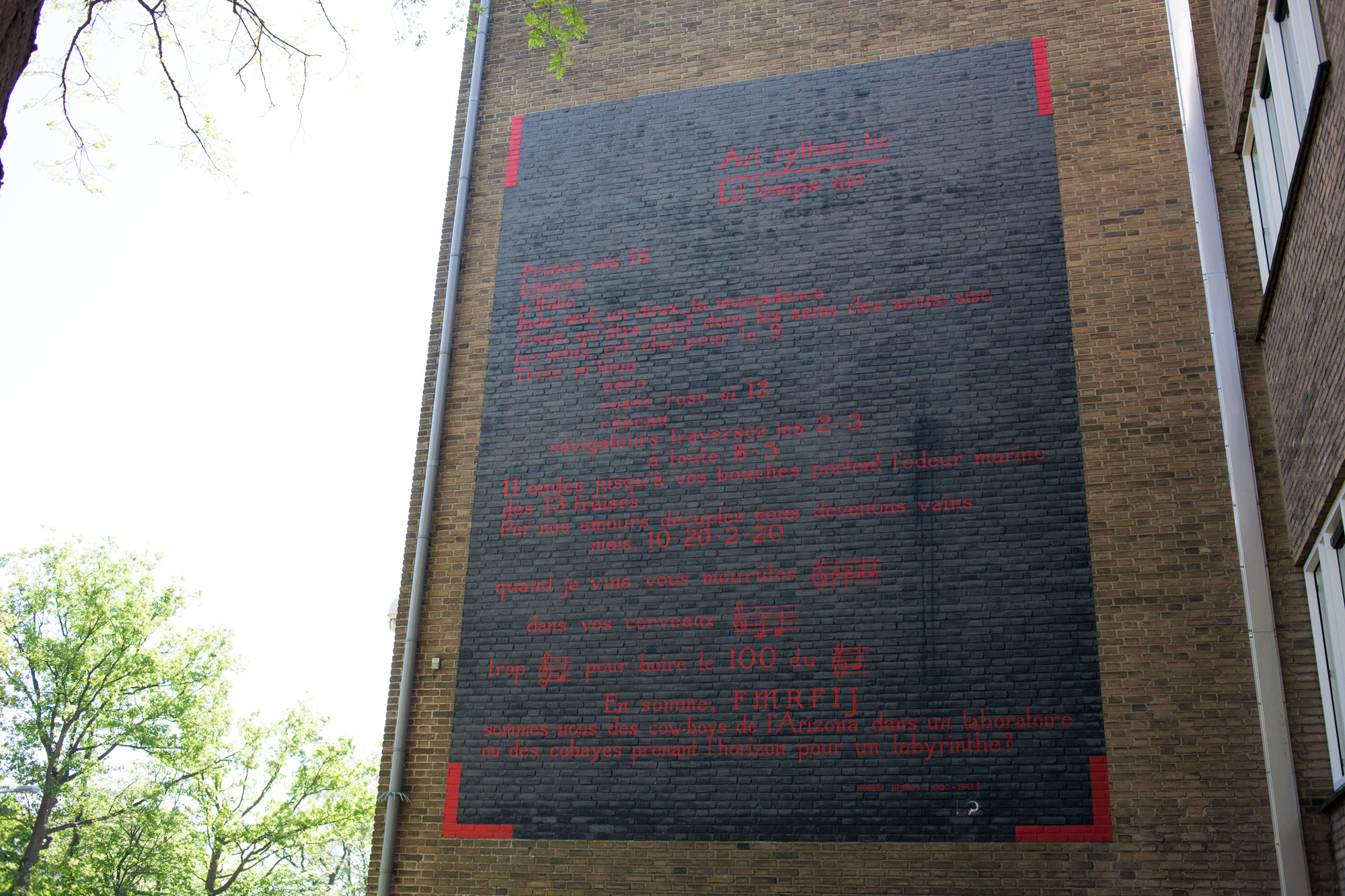 In September of 2002, the poem Art rythmé; tic was applied to the wall of the Da Vinci College (Kagerstraat 7) in Leiden in celebration of the school’s new wing. TEGEN-BEELD Foundation had two conditions for the poem that would adorn this wall. Firstly, the poem had to be from the interbellum period, and secondly, it had to be representative of the modernist movement in one of the languages taught at the school. Eventually, they came up with this poem, which was proposed and defended by staff member Jan Bruijsse. The then PvdA (Dutch Labour party)-chairman Wouter Bos and alderman for culture Alexander Pechtold were the ones to reveal the poem.

Remarkle about this poem is that it is spread on two walls of the building. On one side - in a big blue square of at least 5 meters high - the poem is painted; on the other wall there are three blue beams. The top beam contains the name of the poet, the middle one a triangular shape and the bottom one his date of birth as well as his death. The triangular shape can be seen as a play-button or an arrow to direct you to poem around the corner. The signature below the poem is an image of a silver sickle, which is the symbol of Jan Bruijsse’s family. 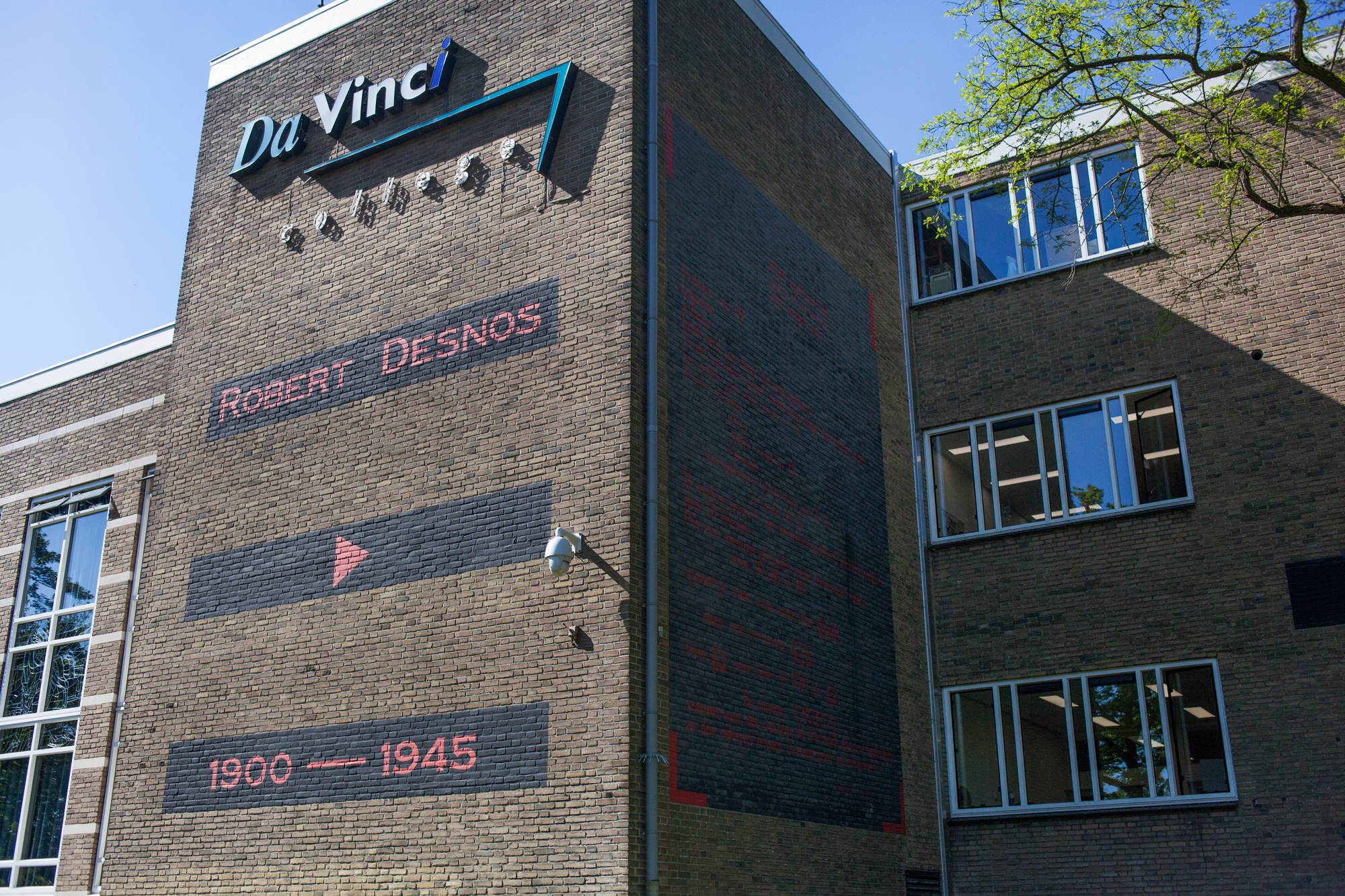 Robert Desnos is one of the most prominent figures within the Surrealism movement. The movement arose around 1922 in Paris, after which it spread globally. Desnos wrote a large number of poems which are considered the pinnacle of Surrealistic language use. The collection Corps et biens, which this poem is a part of, contains the works of Desnos between 1919 and 1929. The title of the collection was significant because périr corps et biens means ‘to die’ and disparu corps et biens means ‘death’. Both are used in the title to signify Desnos’s farewell to Surrealism.

In March of 1930, Desnos wrote in an article published in a magazine that “Surrealism in the public domain has subsided, at the disposal of renegaters, of segregationists and atheists.” To him it had become old-fashioned and he was looking for something different. He found this in radio. His former like-minded peers did not react well to his departure. One of them even claimed it was impossible, abandoning the Surrealist movement.

Desnos speaks surrealism at will. The strange adaptability in which he orally delivers his thoughts, gives us marvelous texts, as many as we would like. However, these get lost because Desnos has something better to do than to put them to paper. He reads himself like an open book, but does not lift a finger to hold the pages in place that fly off on the breeze of his life.

André Breton, author of The Surrealistic Manifest, about the literary performance of Robert Desnos. Translation by F. Drijkoningen and Natasja Oorthuis.

Seize your 16
Litanies
not Italy's
Want to, one two, ladies' excuse me
Free, for fur hive, your six in the beehives
You; save 'n ate by 9
Free Trojans from Illion
twelve
dewdrops and rose drops
blue dew so soft
Navigators cross Detroit
at gr8 speed
11 waves carry the sea's scent up to your mouths of 13 de-pressed berries
By our multiplied loves we become useless
divinely entwined
When I came your death was noted
in your seedy brains
too full to drink the blood of Jesus

To sum up, FMRLFEG
are we the cowboys of Arizona in a laboratory
or guinea pigs taking the horizon for a labyrinth?

This entry was written by Jan Buijsse in collaboration with Jan Buijsse. The translation into English is by Natasja Oorthuis. The following publications were consulted: