Listen to this poem in French.
Voiced by: Céline Zaepffel

Pierre de Ronsard dictates his final poems on his deathbed. He is the most well-known poet of his generation; even the French court would attend his funeral. This poem is his last chance to immortalize himself. Once more, he repeats what made him famous; he draws inspiration from classic antiquity and adds a personal touch. The subject at hand, death drawing near, is obvious. De Ronsard addresses his soul directly, mockingly and lighthearted; he wishes it all the best, as long as it lets De Ronsard rest calmly in his grave.

De Ronsard was a Renaissance poet from France. His contemporaries named him ‘prince des poètes,’ prince among poets. He was the leader of the poetry group La Pléiade, which consisted of seven young French poets who together wanted to revive and improve poetry from the Classical period. They preferred French over Latin verse. Love, nature, mythology and antiquity were important subjects in their work.

In Pierre de Ronsard’s work, death is a recurring theme. De Ronsard was particularly interested in immortality, to the point that the grave became a symbol of immortality for him. He wanted to conquer death, gain posthumous honor. De Ronsard was incredibly productive until the very end. Literally, because on his deathbed he dictated several poems, including À son âme (Poem to my soul).

De Ronsard started his career as a secretary and a diplomat at the French court, but had to quit as he went deaf after an ear infection. A diplomatic career was no longer possible and his father thus sent him to a monastery. Here, he started writing poetry. He won multiple prizes and was quite popular at court. The entire court was present at his official, well-attended funeral in Paris.

À son âme, the title of the poem translated literally “to his soul,” the soul of De Ronsard.

Pierre de Ronsard is lying on his deathbed and is wondering where his “amelette” (little soul), “treschere hostesse de mon corps” (dearest inhabitant of my body), would go to now that it is “pasle, maigrelette, seulette” (pale, frail, alone). It is a serious question, but De Ronsard approaches death in a lighthearted and playful manner. He wishes his soul the very best, as long as the speaker may sleep peacefully.

The fact that impending death does not worry De Ronsard speaks from the sounds of the poem. Many words have the suffix -ette (Amelette Ronsardelette, Mignonnelette doucelette, foiblelette, maigrelette, seulette); making them diminutives (little soul, little Rosard, little darling little sweet, little weakness, a bit fragile, a bit alone). The use of diminutives causes the poem to sound satirical and ironic.

Not afraid of death

The poem, therefore, does not convey any fear of the hereafter. During his studies of the antiquity, De Ronsard became familiar with the work of the Greek philosopher Epicurus (341 - 270 BC), who stated that death was nothing more than the separation of body and soul. This thought is echoed in this poem, in which De Ronsard provocatively bids farewell to his soul. The last words can be read as someone who has come to terms with the inevitable end.

De Ronsard was a well-read man and had extensive knowledge of many Ancient Greek and Roman poetry. À son âme seems to be based on the poem Animula vagula blandula, which is said to be written by the Roman Emperor Hadrian on his deathbed in the summer of 138 AD. In the poem, he bid farewell to his soul:

My soul, my pleasant soul and witty,
The ghest and consort of my body,
Into what place now all alone
Naked and sad wilt thou be gone?
No mirth, no wit, as heretofore,
Nor Jests wilt thou afford me more. 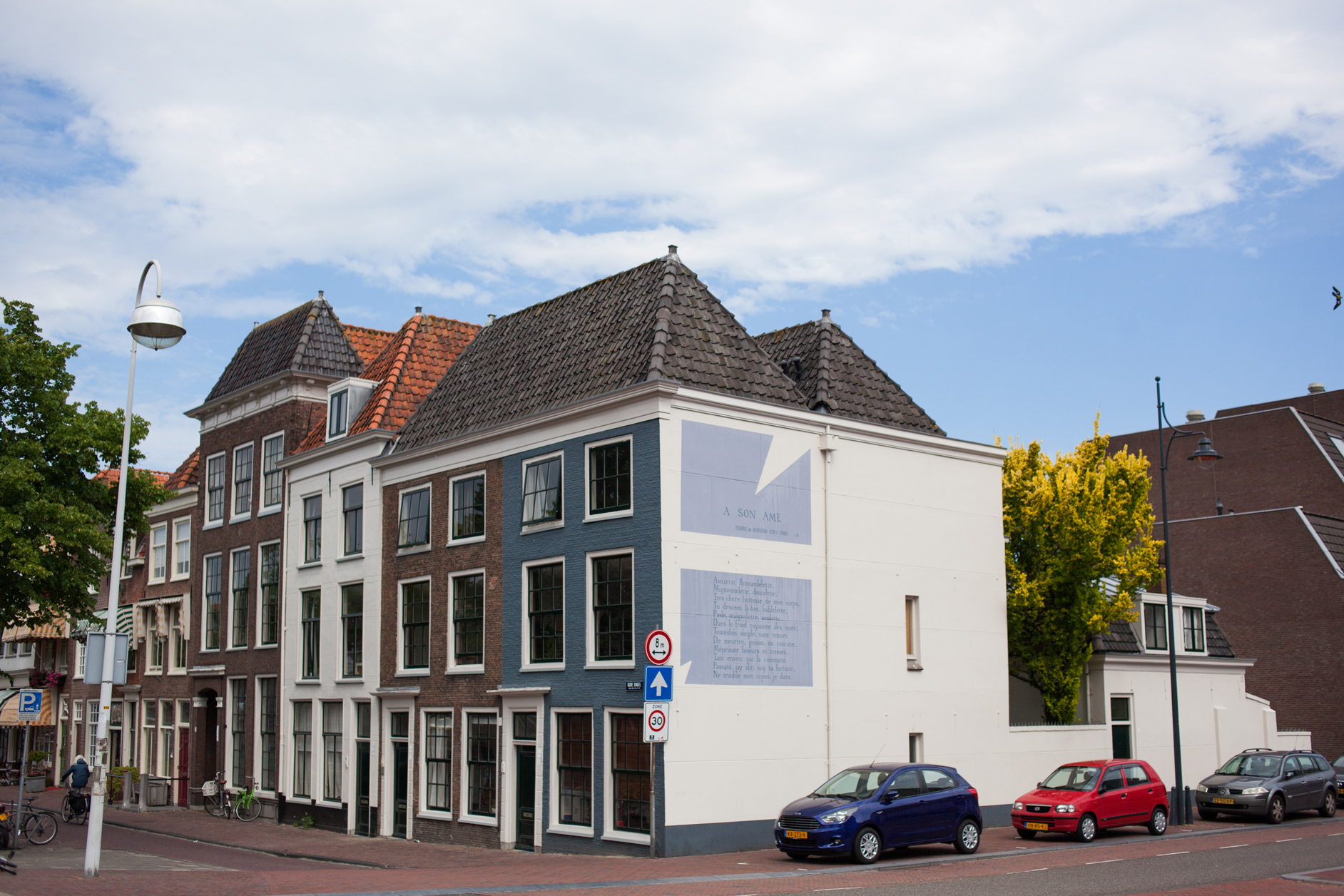 This wall poem can be found in Leiden since 1998. The colors used first where rather light and, with the wall facing south, the paint quickly started to fade. In May 2008, the poem was repainted in a different spot, around the corner so that the sun could not affect the paint as much. The original painting has not been removed, but increasingly fades.

Pierre de Ronsard is the least known of our unknown poets.

Gilbert Gadoffre, De Ronsard’s biographer, wrote that he was one of the greatest unknown poet of all unknown poets. During his life, De Ronsard was a renowned and celebrated poet but in the two centuries that followed his name fell into oblivion. It is quite ironic, for De Ronsard was almost obsessed with immortalizing himself and being remembered eternally.

Listen to this poem, performed by Ravel online.

Poem to my soul

Poor dear wee soul, sweet
sleekit soul of poor wee Pierre,
sweetest inhabitant of my wee heap
of flesh and bone,
already you've begun to creep,
all frail and pale and wull from out my bed
down to the cold Kingdom of the Dead.

You are guileless, guiltless, rancourless,
distrusting favour and reward
thus envied by your petty peers.
I feel you seep
away from me, your carnal nest.
Goodbye, wee love, just keep
right on and don't disturb my rest.
I've gone to Sleep.

This entry was written by Het Taalmuseum in collaboration with Angélique van Drunen. The translation into English is by Demi van de Wetering. The following publications were consulted: