In the 1950s, the Japanese artist Seiichi Niikuni laid the foundation for concrete poetry. Here, it was not so much about the meaning of the poem, but about the shape and structure. The shape of his poems could hardly ever be seen separately from the subject. For example, he wrote a poem, Rain, consisting of kanji characters that, together, depict rainfall. River/Sandbank is another example of this shape poetry. The poem represents the water from a river that comes into contact with the shore, the sandbank, in a straight line. It invites spectators to think about borders. For example, how thin is the dividing line between visual art and poetry?

Seiichi Niikuni was a well-known Japanese poet and painter. He studied architecture at the Sendai Technical School and English literature at the Tohoku Gakuin University, from which he graduated in 1951. In the 1950s, he also started doing avant-garde experiments. He developed a form of poetry that presented language as both a visual and an auditory phenomenon. He also created his first ‘seeing poems’, in which figures were depicted by using Chinese characters (kanji), and ‘listening poems’, consisting of hiragana, katakana (both are Japanese script types) and numbers.

In 1964, Niikuni joined the E.E. Cummings study group, where he met Yasuo Fujitomi. Together they established the Association of Study of Arts (ASA). Their goal was to further explore visual - or concrete - poetry and to experiment with this. They believed that the typographical effect was more important than conveying the (verbal) meaning and arranged the words, letters and characters in such a way that they represented the subject. From this rose an international avant-garde movement.

Niikuni’s fame grew when he published his collection Zero-on (1963), of which the first half consisted of calligraphic poems and the second half of auditory poems. He moved to Tokyo and exhibited his work all over the world. In his poems, he often used words related to the body (such as ‘lip’ and ‘blood’) and life and death. Also, from a young age, he was fascinated by surrealism and philosophy.

His entire life, Seiichi Niikuni suffered diseases of his chest; he constantly worried about his health. He passed away on 23 August 1977, only 52 years old. His death also meant a quick end for concrete poetry and the familiarity of the public with his work.

This poem is one of many typographic, or concrete poems created by Niikuni. The poem literally represents a river and a sandbank, separated by a diagonal ‘line’. The left side of the ‘line’ is the river, and the right side is a sand plain: the beach or the shore. The content or meaning does not matter as much in shape poetry: it is about the structure and the form, how you can portray something with a sign (that means something) and the effect it has on the reader. The reader can draw his or her own conclusion of the poem.

River/Sandbank came into being in the 1960s. The period between 1950 and 1970 is known for the bloom of visual poetry: artists from all over the world ventured towards the thin line between poetry and visual art.

It is a modernist poem too. Modernist artists looked at the visual and phonetic aspects of language, in other words the structure and pronunciation. The actual content of the words was pushed to the background. Niikuni played an important role in the shift from semantics to typography. In his poems, he experimented with the outward appearance of sounds. 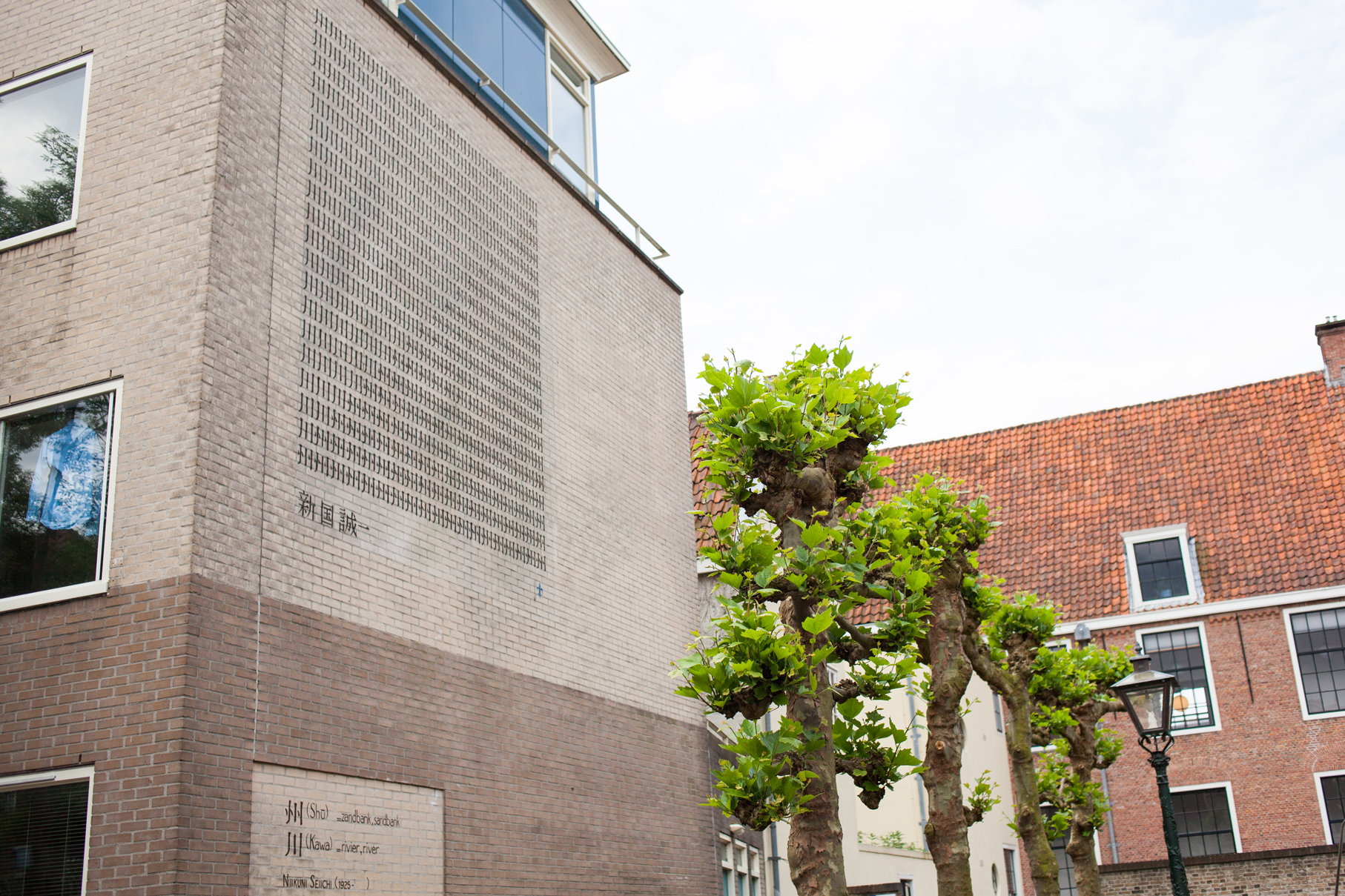 This poem can be found at Pieterskerkgracht 17 in Leiden since 1996. It is the 39th wall poem realized by the TEGEN-BEELD Foundation.

Seiichi Niikuni was the founder of concrete poetry. He inspired other artists and poets to experiment and play with language. His work shows how to make a painting out of a poem without it having a substantial meaning. Everyone can ponder about the meaning, if any.

Meeting Seiichi was one of the milestones of my life. His first manifestos, the first works, mostly concrete or sound poetry, were like firebrands, circling around the world, enlightening and setting each and every one of us on fire