Listen to this poem in German.
Voiced by: Niels Schiller

How does an artist create their best work? Is it in complete freedom, or by complying to the rules and limits of a genre or movement? In this poem, Johann von Goethe pleads for the latter. It is an artist’s duty to place rules and creativity in harmony with one another.

Johann von Goethe was expected to pursue a legal career like his father. He studied law at Leipzig University but was more interested in student life. He had multiple lovers and experimented with painting and alchemy, among other things. He also started writing. His dissertation was disapproved, yet he was able to obtain a degree in law by passing an easier exam.

Fame at an early age

In 1773, when Goethe was 24 years old, his first play was published: Götz von Berlichingen. He also wrote poetry and worked on acts of Faust, the tragedy on which he worked his entire life. In 1774, he published Die Leiden des jungen Werther (The Sorrows of Young Werther) which brought him worldwide fame. He got offered a position as a teacher in Weimar by the local duke. It was not much to his liking and without informing anyone he left for Italy in 1786. There he hoped to regain his artistic inspiration.

The journey to Italy was a success. Goethe finally finished the manuscripts he had been dragging along with him for years and regained his confidence. Together with Friedrich von Schiller (1759 - 1805), who became a close friend, Goethe developed his art theory: art was to show the ideal, like it did in the classical antiquity. Art had to educate people to become better citizens. In the decennia that followed, Goethe and Schiller grew into icons and to this day their work is still widely read in the German linguistic region.

A recurring theme in Goethe’s work is the relationship between art and nature. Here, nature implies something else than flora and fauna. According to Goethe, nature was primal, that which mankind produced themselves without regard to any rules: that which is free. Art, then, was manufactured, everything complying to certain rules: that which is bound. At first, Goethe regarded these concepts as opposites which could not be combined. Later on, he came to see them as complementary: art, and thus culture, was build upon nature. That is his stance in this poem.

How did this harmony between art and nature come to be? Goethe states in the second stanza through genuine effort. If we devote ourselves to art with spirit and diligence, nature will open up in our hearts. Those who make an effort to follow the rules of art will not only create great art but also a natural work which speaks from the heart. According to Goethe, everybody needs rules to achieve something - those without restrictions will only exhaust themselves.

Those who want to achieve something greater will have to limit themselves and oblige the rules. “In der Beschränkung zeigt sich erst der Meister” (Mastery is revealed in limitation), Goethe writes but also proves with this poem. This sonnet always complies a certain set of rules: two stanzas of four lines followed by two stanzas of three lines, while conforming to a strict rhyme scheme and a set meter. Goethe shows that all these rules do not limit him but enable him to write a beautiful and natural poem.

In 1791, Johann von Goethe became the director of the Weimar theater. The ensemble did not only perform in Weimar but also in Bad Lauchstädt during summer. Since there was no proper accomodation in Bad Lauchstädt, it was decided to build a new theater to which Goethe himself contributed. Eventually the new theater was opened on 26 June 1802 in the presence of Goethe and 672 guests. To illustrate the new theater’s purpose, this sonnet was read at the opening. Whether Goethe wrote it especially for this occasion is uncertain; according to biographers, the poem had been shelved for two years.

Theater maker Erik Siebel interviewed house owners about the poems on their walls. Listen to the interview with Wolfgang Keller: ‘If you’re ever looking for a wall …’

I once said to her: ‘Hey, if you’re ever looking for a wall in the city where a poem can be painted, I have a wall available.’ And a few years later, I received a call by the TEGEN-BEELD Foundation and they said: ‘Yeah, from Jacowies Surie we heard that you have a wall available. We have already looked at your house, and we have also already looked at the wall, and we think it is very suitable for a wall poem. Could we come by and talk about this sometime?’, ‘Of course, be welcome.’ Well, they came by, they said they would bring someone else as well, a president of the student association Faust, because in 2014, they would exist 25 years and because of this anniversary they wanted to gift something to the city. They had spoken with mayor Lenferink and he had said: ‘Well, I think it would be nice if you make sure another wall poem is added in the city. That would be a nice gift.’

Then they brought a small book with all poems by Goethe and they had already made a selection of a few poems they liked themselves. I believe they had chosen about five, so the five of us then went through these and finally reached the decision - which actually was a joint decision - to pick Natur und Kunst.

Some time later, Jan Willem Bruins, the painter, placed his stuff here and built scaffolding and he, yeah, worked diligently and we think he placed it beautifully on the wall.

Yes, actually we are very happy that the poem came here. We have also unveiled it in quite a fun way. The ambassador of Germany came, the vice-mayor of Leiden was here, Laudy, the president of the Goethe-Institut joined us, the entire student association joined us. And all kinds of people attended, such as education professionals, teachers of German who found it beautiful, students of German, a professor who teaches German here, so our street was pretty crammed.

We thought and still think it very nice that the poem came here and we also notice that it draws people here. People regularly walk by, who are probably just on a city walk, and have also looked into the fact that wall poems exist and they peacefully read the poem in front of our house and discuss it among each other. My neighbor across the street has a bench in front of her house and often people sit there opposite of the poem. That is very funny to see.

I also often stand before it. I still think it is a beautiful poem and, yeah, I often get questions about it from people who are visiting us, they say: ‘Hey, this is fun’, and then we all have to go outside and have another look. So, in every single way it just is a enrichment, I think, for the surroundings. An enrichment, again, for cultural life, I think. People who may not really be into reading poems, I feel, are fascinated by it this way.

No, I hope it will stay legible on the walls for years and years to come. And, well, more people hope so. For example, student association Faust hopes so. They now come here to Café Plantage on a regular basis for their get-togethers to get their drinks. They used to do this in the city, but now that the poem is placed here the student association comes here on a regular basis to Café Plantage. Well, Plantage welcomed them with open arms. Sometimes, the entire group stands on the street, and they read it to each other. And new members must, when they become a member of the student association come study the poem during the initial period of their membership. They just adopted that rule. So that is very fun.

What I can remember, however - when Jan Willem Bruins was busy painting it on the wall, I said: ‘Jan Willem, again, I am really glad this is happening, but I’m afraid of one thing and that is graffiti. Do you think that, at some point, some brats will defile it with their spray can?’, and he said: ‘Wolfgang, I’ve never seen that happen before.’ 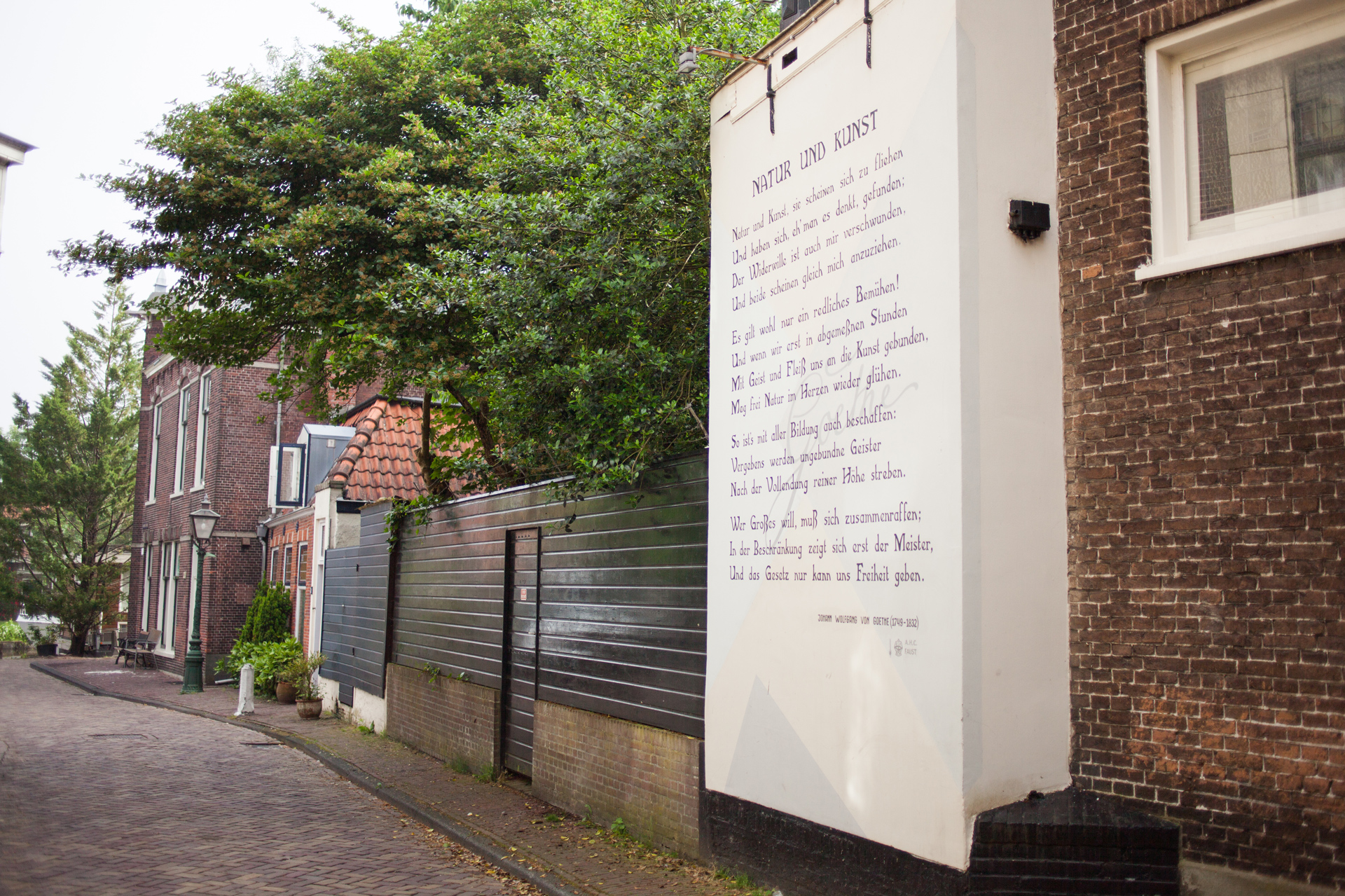 In 2014, the fraternity Faust, part of student association L.V.V.S. Augustinus celebrated its 20th anniversary. They decided to give a wall poem to Leiden and since Goethe was not yet part of the project, his poem Natur und Kunst was chosen. On 11 September 2014, the poem was revealed amidst great interest by the then ambassador of Germany.

Goethe’s influence on German literature is enormous. He is regarded as Germany’s most famous writer and as one of the greatest Germans of all times. German literature was shaped by Goethe’s work to such an extent that some writers saw his death as a liberation.

Art: a different Nature, also mysterious but understandable; for it springs from the mind.

but Art is long, And Life, alas! is fleeting.

Nature and Art, they go their separate ways,
It seems; yet all at once they find each other.
Even I no longer am a foe to either;
Both equally attract me nowadays.

Some honest toil's required; then, phase by phase,
When diligence and wit have worked together
To tie us fast to Art with their good tether,
Nature again may set our hearts ablaze.

All culture is like this; the unfettered mind,
The boundless spirit's mere imagination,
For pure perfection's heights will strive in vain.

To achieve great things, we must be self-confined:
Mastery is revealed in limitation
And law alone can set us free again.

This entry was written by Het Taalmuseum in collaboration with Chris Flinterman. The translation into English is by Demi van de Wetering. The following publications were consulted: