In 1918, Paul van Ostaijen moved to Berlin where he was introduced to experimental artists. Their views influenced his work greatly, but for his following collection of poems, he chose his hometown of Antwerp as his subject instead. Van Ostaijen’s poetry contains impressions from this port city during World War I. In Mobile, he captures a night out on the town in text and image. The way in which he used these two is quite innovative as the two can hardly be seen separate from each other.

Paul van Ostaijen grew up in Antwerp. Even though he did not finish school, he found a job as a clerk at the city hall during World War I. He really needed the job because he liked to live a life of luxury. He behaved like a real dandy with his bright-yellow suits and cap made from otter fur, and was often found partying. He also got hooked on cocaine.

In 1916, when he was twenty years old, Paul van Ostaijen published his first collection of poetry Music Hall. Two years after this publication his second collection of poetry Het Sienjaal (The signal) appeared. Around this time, he also became politically active in the Flemish movement. In 1898, Dutch was widely accepted as the official language but the Belgian elite looked down on the language. Van Ostaijen took part in a demonstration and fled with his girlfriend to Berlin to escape prosecution.

Shortly after he arrived in Berlin, Van Ostaijen got acquainted with several experimental Dadaists. Their influence can clearly be detected in his collection of poetry Bezette Stad (Occupied city). The focus lay on the typography especially and the sentences became shorter fragments which had to be stitched together. Creatively speaking, his period in Berlin was a big success, but unfortunately not financially. He returned to Antwerp where he completed his military duty with great dismay. Shortly after this, Van Ostaijen contracted tuberculosis and was admitted to a sanitarium. Regrettably it was to no avail and on 18 March 1928 he died at the age of 32.

In his collection of poems Bezette Stad (Occupied city), Van Ostaijen published his five part poem Music Hall of which poem Mobile is part of. He let himself be inspired by concert hall Wintergarten along the Antwerp Meir where one of his friend performed on a regular basis. In this poem, he describes a night out on the town from beginning to end. Just listen.

The sound of music...

Music occupies a special place in this poem. It begins with the title ‘mobile’ which means ‘movement in music.’ The first verse introduces two characters who are bound by music: the “orkestmeester” and the “orkestrionpage.” The latter is an instrument used to work the ‘orkestrion’; a mechanic device which can replace the the brass section of a orchestra.

In the second verse, the music starts playing: a stringed instrument sets the tone, the cymbals answer and the dance partners begin to sway to the rhythm of the music. The tables have been pushed to the side, which allows the partners to dance in a circle throughout the room. This creates a hole in the middle, which makes the whole thing looks like a whirlpool.

The dance in motion

The dance hall starts to spin and the dance partners become wavers (“zwalpen”), their sweat (“zwarte parels”) drops. The verse “SteP staP OP” indicates that the beat becomes up-beat because “POPulaire liedjes” follows. This is indicated in the next line: “Marie Plancher” was a popular operetta song. Paul van Ostaijen uses a variation of this by using “Marie Planchée,” which sounds the same in Dutch but has a different meaning. ‘Plancher’ is French for ‘the floor’, which takes us back to the dance floor.

The “dikke cilinder” could be perceived as drums or other percussion instrument which sets the beat. Even the director, the “baas,” starts to dance and Van Ostaijen shows the dance steps. Feet are bobbing up and down which is mimicked in the typography as the “hip” moves up.

The music stops - and so does the dance

But then the music stops: the string instruments say “stoP” on which the dancing stops. As a result, the circle disappears in which the dance partners were dancing in and so does the whirlpool, the “ronde” (round) in a “vierkant” (square) room.

In the 1920s, Berlin was considered the homefront for a group of Dadaists. Paul van Ostaijen got acquainted with this art movement and used their ideas for his new collection of poems Bezette Stad (Occupied city). In this, he captured his experiences in Antwerp during the World War I. The collection of poems also contains the eye-catching poem Mobile, in which not only the content plays a big role but also the striking typography. The form and content of the poem become one.

The technical ‘Don Bosco’ school at Boerhaavelaan 44 was built in 1954 of glass and concrete. Tough yet efficient, as suits the post-war reconstruction. On its 40th anniversary, the school received a wall poem: Mobile by Paul van Ostaijen. The text dances gracefully across the wall from left to right, suddenly going down, and coming together at a ladder of words that ends on the floor. Then SteP staP OP to the neighboring wall. The form follows the content, as befits an old technical school. Imre Boomsluiter was once an intern at the school. The poem was beautiful, even without reading it. Now, Imre works in demolition. As long as he is leaning on his crowbar, the poem stays up. Still, in shaky balance on the half-demolished facade. Like a ballerina between the scenes. The blow will follow soon. Tough yet efficient. Short stoP. End of dance. 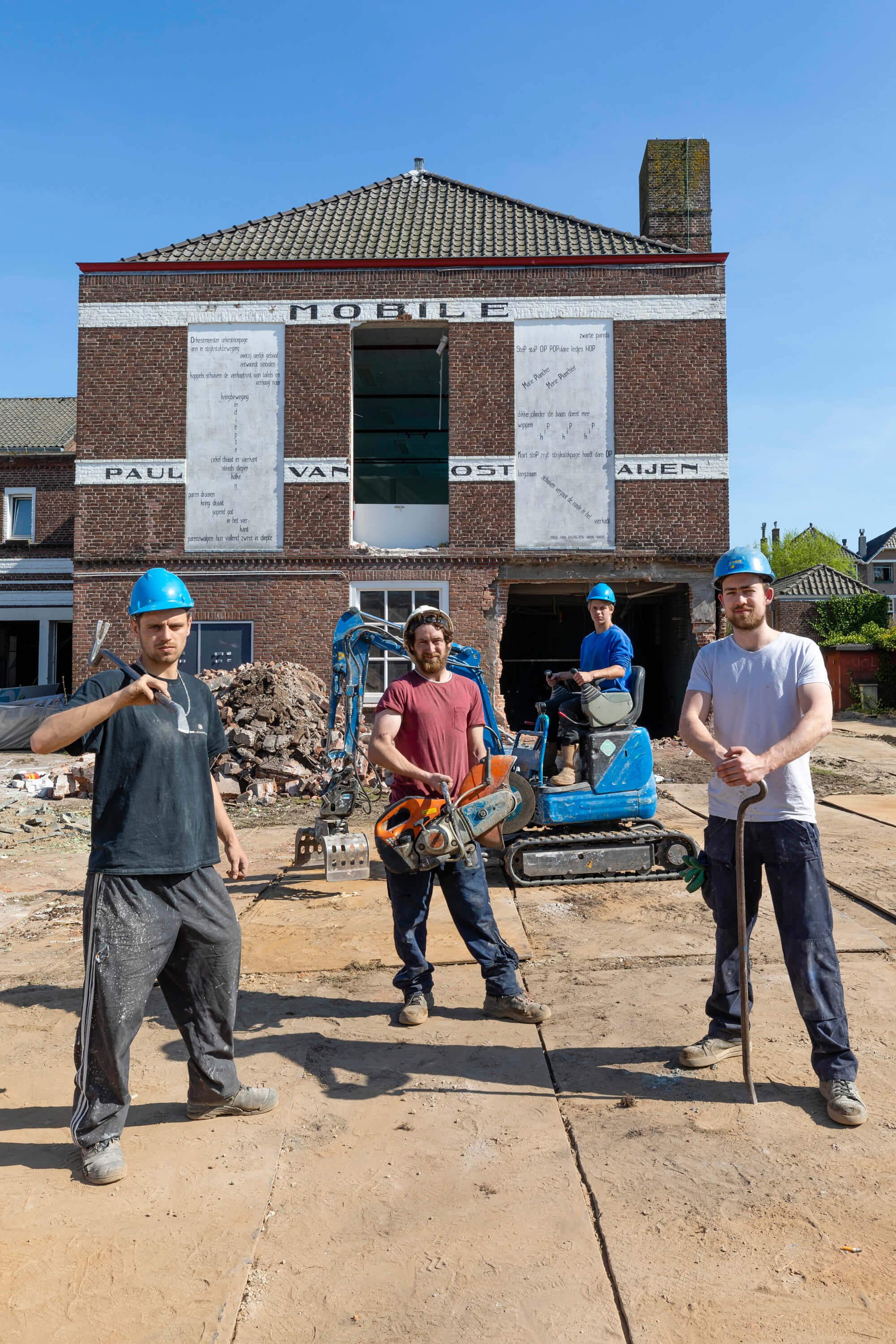 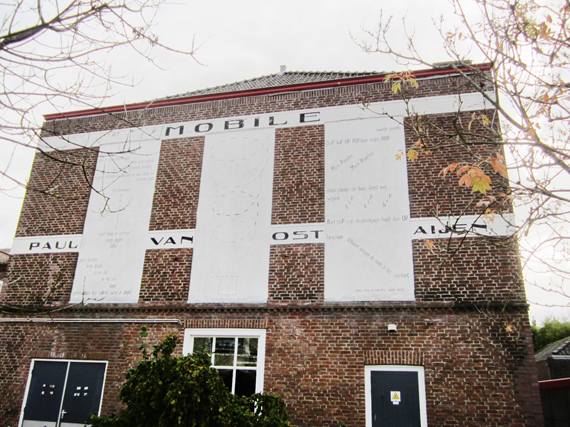 This poem could be found in Leiden since 1994 on the schoolyard at Boerhaavelaan 44. Unfortunately, it was removed in 2018.

Even though the poem in the poetry collection already diverts strongly from traditional poetry, other additions have been made to the wall poem as well. The poem is painted on two of the three panels and the middle one contains a whirlpool which serves as the background of Mobile. The small lines could be seen as different dance partners making separate steps into a dance. The name Paul van Ostaijen is painted in between the panels.

I wake up in the morning with this problem: ‘what can I do that has not been done before.’ I make myself interesting by arrogance, which at least is more honest than pretending to be interesting with modesty.

Paul van Ostaijen about his poetry.

Paul van Ostaijen also wrote a film script. The film was going to be called De bankroet jazz and was about the Dadaistic revolution in Europe. It was not until 2009 that the film was finally created with images from the 1920s. You can watch the film here.

This entry was written by Het Taalmuseum in collaboration with Chris Flinterman. The translation into English is by Natasja Oorthuis. The following publications were consulted: