Listen to this poem in Russian.
Voiced by: Zina Anisimova

Marina Tsvetaeva is 21 years old and on vacation in Crimea when she looks back on her life as a poet thus far. She is a promising talent and owes the trip to her flourishing reputation. But the best is yet to come, she says in this poem. Wait and see. She was right: Tsvetaeva became one of the most famous and most read Russian poets. New generations recognized themselves in her verses, and were appealed by the rhythm and the sounds which are almost untranslatable. Yet fame not only brought fortune. Her life was full of tragedy.

Marina Tsvetaeva is one of the most famous Russian poets and is often called the most tragic as her life was full of misery. From an early age she was interested in poetry, and may have been inspired by her father, who was an admirer of poet Alexander Pushkin (1799 - 1837). Even though Marina’s mother died when she was fourteen years old, her adolescence was probably the happiest period of her life, a period she closed in 1913 with the optimistic For my poems.

Tsvetaeva married less than a year after the publication of For my poems. It was a turbulent marriage: Marina recklessly rushed into affaires with both men and women, and her husband, who was a soldier, was often gone for long stretches of time. He disappeared completely around the Russian Revolution in 1917. Despite her success as a poet, the family lived in immense poverty. The story goes that an intruder, startled by her poverty, left money behind instead of stealing it. In 1920, Marina felt compelled to bring her daughters to a children’s home; she never saw the youngest one again.

In 1922, when she found out that her husband was still alive, the couple sought refuge in Berlin, Prague and Paris. She felt very lonely there, and did not write much. In 1939, she returned to Moscow, where Stalin was at the height of his power. Tsvetaeva’s husband and daughter were arrested in 1941 for espionage. That same year, she ended her life. Her legacy consists of more than fifteen hundred poems, eight plays, and numerous essays and letters, which are still widely read.

In For my poems, Marina Tsvetaeva writes about her poethood. She started writing verses at a young age, “before I knew how to be a poet.” At home, she was not considered a poet, as her mother saw nothing in poetry and hoped that Marina would have a musical career. Perhaps that is why her poems were “invading, like some tiny demons”?

When Tsvetaeva wrote For my poems, she had already published her first poetry collection. However, she was not what you’d call well known. Were her poems actually “thrown here and there amid the dust of various bookshops”? It is highly possible. At least she did not doubt that this would change: “For my poems, stored deep like wines of precious vintage / I know a time will come.”

In an artist’s pension in Crimea, the gathering place for the Russian aristocracy, Marina Tsvetaeva takes up the pen on 13 May, 1913. She is in her early twenties and looks back on her poethood in the poem For my poems. At a young age, she felt herself a poet, to the dissatisfaction of her mother, a concert pianist who preferred to see Marina behind the piano. Yet Marina wrote poetry, and with success. Her first collection Evening Album, which she published herself at the age of eighteen, convinced the influential Max Voloshin to personally bring his favorable review to her, and to invite her to his country house in Crimea. This is where she wrote For my poems, in which she looked back on her youth but also looked ahead. 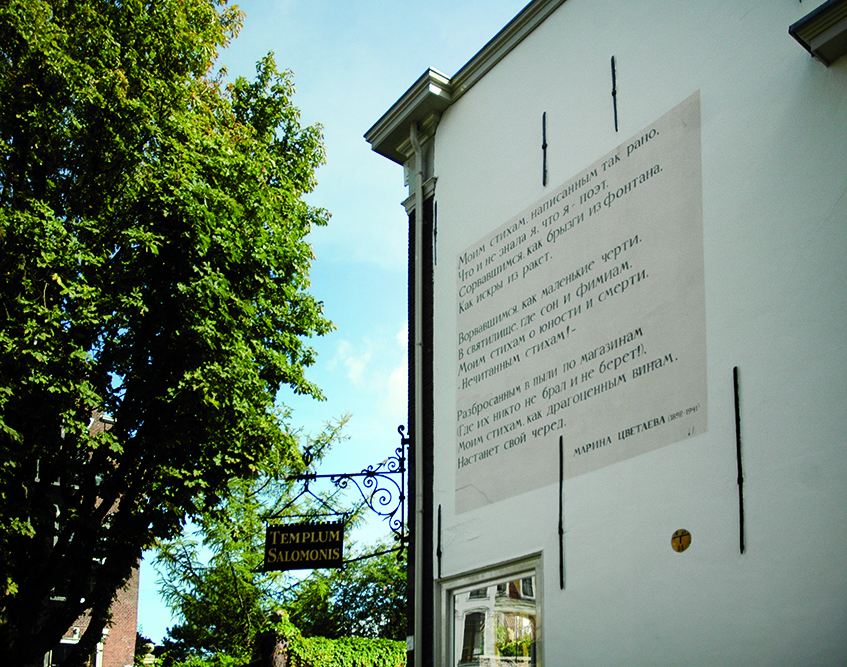 In 1992, Leiden was surprised by the first poem on a wall, For my poems by Marina Tsvetaeva. For Leiden, this took some getting used to. It turned out to be an initiative of Jan Willem Bruins and Ben Walenkamp, Leiden natives with a fondness for poetry. The choice for this poem fell on Marina Ivanovna Tsvetaeva, as she was born one hundred years prior and because she was Walenkamp’s favorite poet. The owners of the building, which also houses the antiquarian Burgersdijk en Niermans, gave permission to apply the poem to the wall. The wall poem made the national headlines and was embraced by the city: a tradition was born.

The poem was painted on the wall in the original language. Bruins painted by example of Cyrillic characters from the poetry collection itself. Those who look closely will see that he made a mistake in the second to last line, and that he later repainted the letters. On the bottom right of the poem, a little spider and a red bar can be found: the little spider is Bruins’s signature, who painted the poem on the wall; the red bar belongs to Walenkamp, who picked the first wall poem and was responsible for its realization.

The information plaque, which contains the translation, still hangs underneath the poem. The plan was to provide all wall poems with an information board, because all the poems were painted on the wall in their original language. However, this plan was cancelled after a few years because the information boards were too expensive, and also because they tended to ‘disappear.’

Few poets are as often identified with “the Russian soul” as Marina Tsvetaeva. Themes as recognition, her eternal search for a soulmate or the anguished love for her homeland were and still are recognizable to compatriots. Her poems were strongly influenced by her personal experiences: revolution, poverty, loss and exile are experiences that were shared and recognized by many. She said: “There are no literary influences, only human ones.”

From controversial poet to beloved Russian

At the time of the Russian Revolution (1917), Tsvetaeva was known as a great poet. Due to her uncompromising and critical attitude, she was quite controversial in the Soviet Union, because of which her work was hardly published until the 1950s. Since then, she has been rediscovered: Marina Tsvetaeva is now one of Russia’s much-read poets.

In Russia (and in other countries) she is praised for her use of form and language. She wrote in a very personal style in which sounds are sometimes more important than words. It is therefore almost impossible to create a proper translation of all her work. Partly due to this, she is relatively unknown in the Netherlands, compared to the status she has in Russia.

Boris Pasternak, winner of the 1958 Nobel Prize for literature

I know no more terrible fate than that of Marina Tsvetaeva

Nadezda Mandelstam, spouse of Osip Mandelstam, whose poem Leningrad can also be found on a Leiden wall.

Tsvetaeva does not think, she lives in her poems

This poem is put to music by the Leiden band Street fable.

For my poems, written down so soon in life, so early
I did not know I was a poet yet,
Forced loose from me like droplets from a fountain,
A rocket's sparking yet,

Poems storming from me, invading, like some tiny demons
The sanctuary where sleep and incense twine,
Their themes made up of youth and death, my poems,
My always unread lines!

Thrown here and there amid the dust of various bookshops,
(untouches then, now, by any readers thumb!),
For my poems, stored deep like wines of precious vintage,
I know a time will come.

This entry was written by Taalmuseum. The translation into English is by Rianne Koene.