Most people are not too pleased with rain. Gerrit Achterberg, however, saw the beauty in it: every raindrop is a small mirror. The closer you get, the more you see, until your own eyes turn into mirrors themselves. Kleine ode aan het water (Modest ode to water) is a tribute to the raindrop.

Gerrit Achterberg grew up in a Calvinist family with eight children. His father was initially a coachman, but later leased a farm. Little to no reading was done in the family, apart from the Bible.

In 1920, Achterberg went to a Christian training college in Utrecht. Four years later, he finished his degree and started working as a teacher. In this period he became close friends with Arie Jac. Dekker. Together they read and wrote poetry, and in 1925 they published their own poetry collection: De zangen van twee twintigers ('The songs of two guys in their twenties'). They went door-to-door and sold their collection to relatives, but Achterberg wanted more; he got in touch with author and editor Roel Houwink who became his mentor. In 1931, the collection Afvaart ('Sailing') was published, which he later regarded his first real poetry collection.

In the 1920s, Achterberg had regularly been violent in relationships, and in 1932 he was admitted to a psychiatric institution. He was now diagnosed as a psychopath. This diagnose was re-established five years later when he molested the 16-year-old daughter of his landlady and shot her mother when she attempted to intervene. Achterberg turned himself in and was sentenced to TBR (detention under hospital orders). He was admitted to the National Asylum for Psychopaths ‘Veldzicht’ in Balkburg.

Achterberg wrote most of his poetry during stays in clinics between 1937 and 1955. They were put in several literary magazines and poetry collections, of which he published a total of 28. Achterberg’s work was awarded the P.C. Hooft Award and the Constantijn Huygens Prize. From 1943, Achterberg got more and more liberties, and in 1955 he was officially absolved from TBR. He died of a heart attack seven years later.

In Kleine ode aan het water (Modest ode to water), Gerrit Achterberg praises the beauty of reflection in the water. Raindrops form puddles of water and lay like a window over the earth: all these drops form big and small mirrors, on which the moonlight is reflected. Whoever looks closely, so close that he can take a draught, will see how the flowers, the mouth and the moon are reflected in the puddle. Then it is reflected again, in the eyes of the narrator. All the reflection is magical.

An ode is a kind of tribute and usually has a length of 50 to 200 lines. Achterberg’s ‘modest ode,’ on the other hand, consists of ten lines including the title. It should be noted that Achterberg considered the title to be part of the poem: if he recited his poems himself, he did not pause between the title and the lines. The poem consists of a title, four lines, an intermediate line, and four lines again. There are no rules in writing an ode: it may have rhyme, but it is not obligatory, and meter and line length up to the writer’s discretion. You can therefore recite the poem in several ways.

Kleine ode aan het water (Modest ode to water) was released in 1931 in Achterberg’s first poetry collection officially published: Afvaart ('Sailing'). Central in most of his poems were emotions such as loneliness, turmoil, but also the feeling of seeing a painting and realizing that you have never really looked at it in all these years. The publisher praised the collection by stating that Achterberg’s view on the world was like a child’s: full of amazement, with an eye for detail. This certainly seems to be true for Kleine ode aan het water.

Theater maker Erik Siebel interviewed house owners about the poems on their walls. Listen to the interview with Hans Snijders: 'So now, it has become some sort of a hidden poem...'

Well, I - the poem Kleine ode aan het water (Modest ode to water) has been placed here because at my school, the Vlietlandcollege, they were busy painting Lucebert’s Poëzie is kinderspel (Poetry is child’s play), and that is how I came into contact with the project. And we talked about the fact that they were looking for suitable walls for the poems. And then I said: ‘Well, I’ve also got a very nice wall, and visible too, from the canal, and I would very much like a poem on it as well.’ And, well, then they came to give it a look, and it was indeed suitable, with a clear view, even from the canal. And then I could go and pick a poem, and I said: ‘Yeah, I’d really like one by Achterberg’, who was one of my favorite poets at the time. And so we went searching. It should also be a poem that expressed the connection with water - with the Rhine, of course. Well, and then we encountered Kleine ode aan het water (Modest ode to water), one of the poems in the collection Afvaart (‘Sailing’), and yes, I immediately thought it was beautiful, even if I was not able to completely understand it at first sight. But it did appeal to me. And then I proceeded to analyze the poem to see how such a hermetic poem, how to explain it. And then you gradually reach the conclusion that it is a poem that is about the outer world and that is about the inner world and it mirrors those, and the eyes, the mirrors of the soul, are then the link between inner and outer world.

It was on the occasion of - that was very nice indeed as well, the unveiling took place on my own birthday. Friends of mine picked up that idea of mine and together with others, they saw to it that the poem was painted on the wall. In the meantime, plans for construction were on the table and in the end, because of a swap of some sorts, the company got permission to start building. When the plans were made public, you could immediately see that the view on the poem would be blocked. And that is just very painful. So now, it has become some sort of a hidden poem. Oh well, that might just make it a little mysterious. [chuckles] You have to really look for it now.

And now still, when I come home, you see it there on the wall and every now and again you look at it again and with pleasure and delight, every time I stand there, I understand it a little better and by that, it becomes a little dearer to me.

It is indeed that sort of confrontation between the most ordinary and poetry. That is the success factor, I think, of the TEGEN-BEELD Foundation and the project. 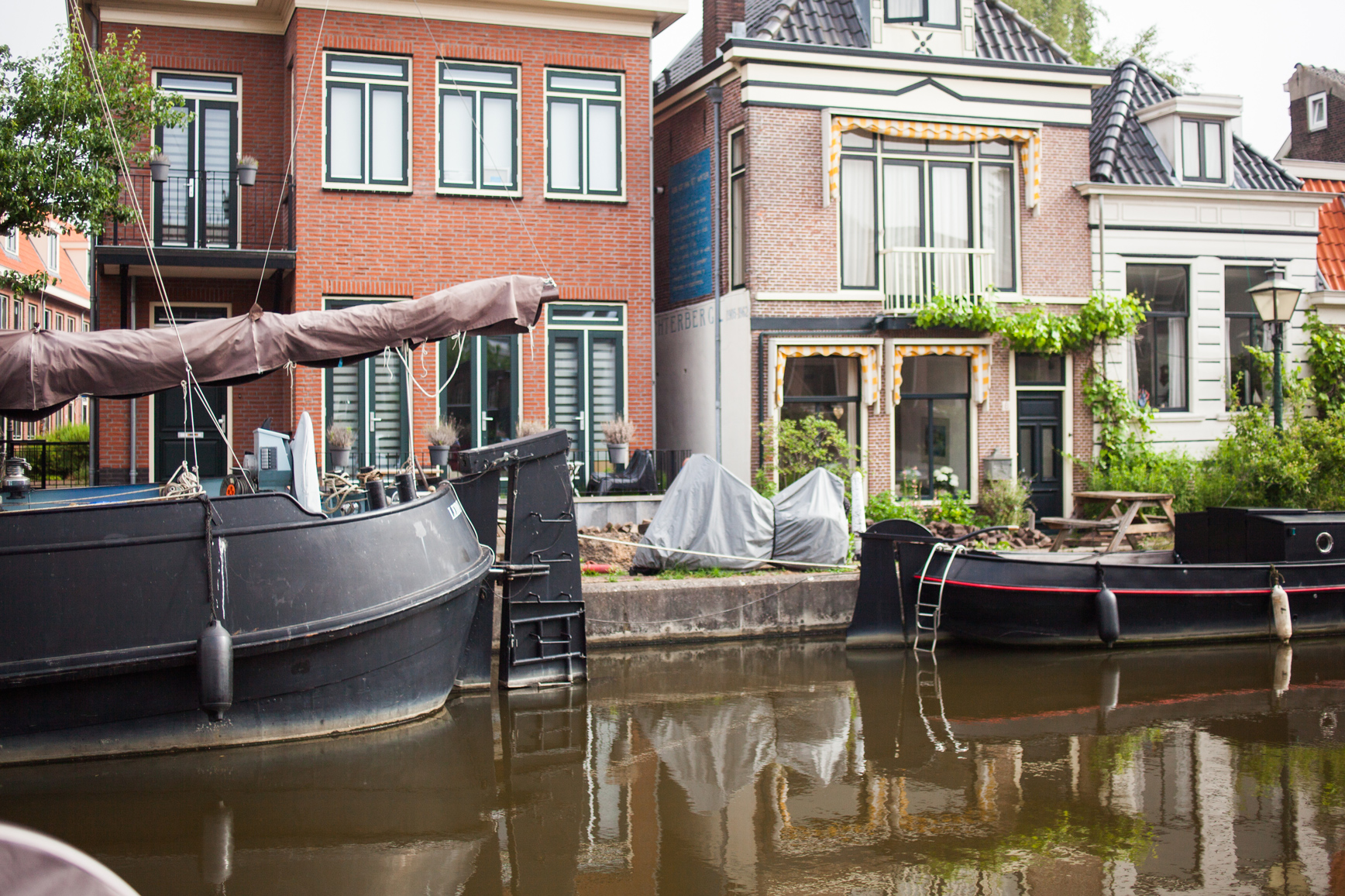 Kleine ode aan het water (Modest ode to water) by Gerrit Achterberg can be found in Leiden since 1997, and is painted on the wall of Rijnkade 8. It is the 47th wall poem realized by the TEGEN-BEELD Foundation.

Note: the poem is only partially visible nowadays, because of new buildings around it.

What isn’t good, wasn’t written by me.

Gerrit Achterberg on the poetry collection De zangen van twee twintigers ('The songs of two guys in their twenties'), which he considered to be ‘unseasoned’.

Achterberg doesn’t use the written word to describe something, but to evoke a world, to evoke and invoke images.

There’s nothing to justify and no need for it anyway. Anyone who considers Achterberg to be a great poet has to learn to live with a failing man.

In poems it is the unclear, vague, dream-like imaginary that is often, if not mostly, its greatest appeal.

Reviewer Henri Borel on Achterberg’s first poetry collection, in which this poem was included.

When rain is like a window strewn
over flowers, mouth and moon
big and round lie down so soon,
big and round laid down so close,
oh draught, by which I doze;
with my face in moon and water
flowers are in my eye water
reflected, I am reflecting in
water windows and moon flowers.

This entry is written by Het Taalmuseum in collaboration with Maarten Mentzel and Hansje Weijer. The translation into English is by Rianne Koene. The following sources were consulted: