During the First World War, Antony Kok, a railway employee, came into contact with writer and painter Theo van Doesburg and they became friends. Together, they established the influential magazine De Stijl (‘The Style’) in 1917. In 1923, when Dadaist artist Kurt Schwitters went on tour in the Netherlands, Kok was inspired to also write a Dadaist poem.

And with that, Antony Kok proved he was a good poet as well.

At first, Antony Kok was no poet at all. As of 1899, he was an employee at the State Railways, just like his father, and would eventually climb to the highest rank. For his work, he lived in Tilburg since 1908. During the mobilization in 1914, writer and painter Theo van Doesburg was stationed close to Tilburg. Antony Kok and Theo van Doesburg got acquainted and became friends.

The duo started working together on an artistic level as well. For example, in 1915, they organized a few evenings during which Van Doesburg would recite poems and Kok would play the piano. They also started thinking about a magazine in which they could promote experimental art. This would eventually become De Stijl (‘The Style’), a magazine that was supposed be of international influence in the art world and which was published between 1917 and 1932.

Kok as a poet

In the meantime, Antony Kok too had started writing experimental sound poems. His first poem appeared in 1917. Influenced by Kurt Schwitters, a German Dadaist, Antony Kok started writing Dadaist poems in 1923. He wrote poems until 1931, when Theo van Doesburg passed away. Kok still wrote aphorisms (short sayings), but did not publish these. All this time, he still worked at the railway, but in 1942, he retired and started studying spirituality and philosophy, subjects that had always interested him. Because of these interests, he moved to Haarlem, where he would join the Rosicrucians. He passed away in 1969.

It is hard to provide an interpretation of this poem, a problem that often arises with Dadaist poems. The content is always in the background when it comes to Dadaist poems, because they revolve around form. This poem, for example, repeats certain sounds and variations on these are very important.

This poem is structured around a few simple basic words that are repeated again and again and reappear in different forms. For example, we see the exclamations ‘ho’ and ‘he’, the pair ‘papa’ (daddy) and ‘mama’ (mommy), the words ‘ga’ (go) and ‘ja’ (yes), which, together with a few other words, form the core of the poem. Striking are the four capitalized words: ‘HO!’, ‘JA!’, ‘GA!’ and ‘DADA!’. Moreover, the typography differs strongly from traditional poems.

Dadaist artists derived the word ‘Dada’ from children’s language. That language seems to be present throughout the entire poem. It can be read as if a young child tries to get the attention of mommy and daddy, calls them to look at something. Why? That remains unclear, because, just like many expressions in this poem, it subsides into a kind of prattling. And that prattling ends in the poem’s climax: DADA! 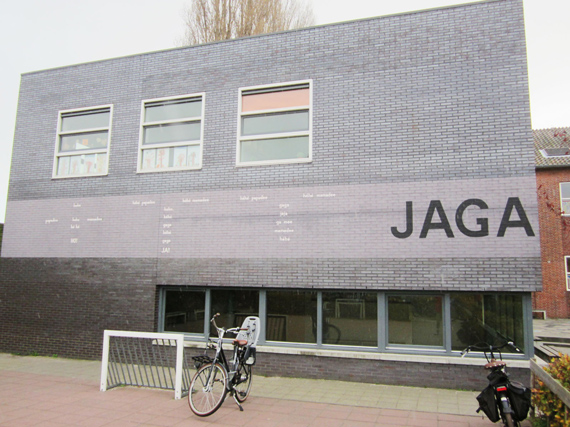 This wall poem was realized at the playground of primary school the Morskring at Damlaan 1 in Leiden in October 1998 by the TEGEN-BEELD Foundation. In 2004, it disappeared again, because the school gym on which it was painted was demolished. In 2010, it was repainted as part of the school’s literary project. In the new design, the poem is divided in a few stanzas, which are placed alongside each other. 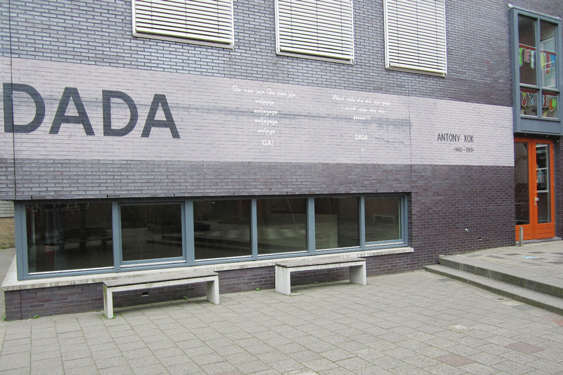 Kok was my guest for a few days. I read him a few Dadaist verses, but had to stop, because I thought it seemed like he was going to explode with laughter

There are various ways of becoming famous. Alcibiades cut of the tail of his dog; Mr. Antony Kok wrote poems for De Stijl (‘The Style’). The latter is even worse than the former. Because all the dog could have done is whine

(For English notes see below)

* héhé: Pronounced as 'hay'. 'Dee' and 'mee' are also pronounced this way, so this is a recurring sound throughout the poem.
** HO!: Pronounced as the beginning of 'home'. It means 'stop' in Dutch.
*** gaga: This means 'go' and is pronounced with the 'g' as on the recording on Wikipedia and with the vowel 'a' as in the British pronunciation of 'hat'. The vowel is pronounced in the same way as in 'ja', 'DADA', 'aha' and the final 'a' in 'papa' and 'mama'. This too is a recurring sound, especially at the end of the poem.
**** JA!: This means 'yes' and is pronounced as described above.
^ ga mee: This phrase means 'Come with me'.
^^ weljajaja: The phrase 'wel ja' is used similarly to the English 'go on' in 'go on, laugh' and often contains a slight undertone of irritation. It is often used when people have a laughing reaction to a very serieus comment.
^^^ want: This means 'because'.
^^^^ 't wordt: This phrase means 'it will be'. The ''t' is an abbreviation of 'het', a Dutch article.

This entry was written by Chris Flinterman in collaboration with Taalmuseum. The translation into English is by Jasmijn van Dongen. The following publications were consulted: