Early on in life, poet Hendrik de Vries was already fascinated by classical Dutch poets such as Vondel and Bilderdijk and would later show this in his work. It is characterized by traditional forms, meter and rhyme. In Een schatrijke tuin (A wealthy garden), he paints a grim atmosphere of a closely guarded garden: whoever enters will never return.

In 1896, Hendrik de Vries was born in Groningen as the son of famous linguist Wobke de Vries. His mother was slightly erratic, so she could often be found in medical institutions. His father was a high school teacher, but could not keep order, as Hendrik de Vries would later observe. As a child, he already discovered poetry by Vondel (1587 - 1679) and Bilderdijk (1756 - 1831), with which he became fascinated. According to Hendrik de Vries, poetry would also be the reason why he did not get very far in school: after redoing the first grade of high school, he dropped out after two months of second grade.

In 1918, De Vries started working at the city archives of Groningen and stayed there until 1947. During that time, he traveled to Spain nearly every year. There, he found a lot of inspiration for his poems. Beside the influences of Spanish poems on his work, he also made translations and wrote part of his poetry in Spanish. Other than a poet, he was also an illustrator and a painter. In 1929, he joined De Ploeg (‘The Team’), an influential group of expressionist artists from Groningen. Even then, De Vries held on to his own style, which at first glance seems slightly classical and in which the subconscious is a recurring theme.

In 1946, De Vries got married and moved to Haren. Not much was heard of him then, partly because his long-time friends died. Former admirers too remained silent. 'I am not a popular writer, but I am appreciated,' he said about this. In 1973, De Vries received the P.C. Hooftprijs, an important Dutch literature award, and he passed away in 1989.

This poem seems to act as some sort of ‘beware of the dog’ sign, but much more frightening.

The first stanza sketches the situation: there is a garden full of treasures (no one knows exactly which ones anymore), which is guarded by dogs. These dogs, however, are ‘rapaciously brutal’ and from this we can conclude that anybody entering the garden will immediately be caught. This is confirmed by the last line of the stanza: they spy on everyone ‘who even comes near’.

The second stanza is a continuation of the first: whoever nears even cautiously, even just one step, will hear the dogs nearby. This holds true for everyone, no matter their rang or position: anyone who enters the garden will never come out alive. The poem is grim and works as an ominous warning.

This poem was written on the eve of the Second World War and bears the atmosphere of that time. Possibly, De Vries was inspired by traditional examples: the image of the Netherlands as a ‘safe garden’ that needed to be protected was a common picture during the 16th century and was also featured in Vondel’s work. Readers of the magazine Groot Nederland (‘Great Low Countries’) would most likely have made that connection. Or did De Vries not think about reality at all and did his garden refer to the dream world, which he incorporated in many of his poems?

The poem Een schatrijke tuin (A wealthy garden) was published in the magazine Groot Nederland (‘Great Low Countries’) in 1939. The outbreak of the Second World War was near; in August, the Dutch army was mobilized and in September 1939, the Germans invaded Poland, starting the war. The poem possibly bears the collective feeling of the pre-war period: the Netherlands were a rich garden that had to be guarded.

De Vries also included the poem in his collection Toovertuin (‘Magic garden’). In 1942, he started putting it together and one year later, he discovered the perfect place for the poem: in between a few other ‘short, furious castanet dances’. However, due to the circumstances of the war, it was only in 1946 that the collection was actually published. 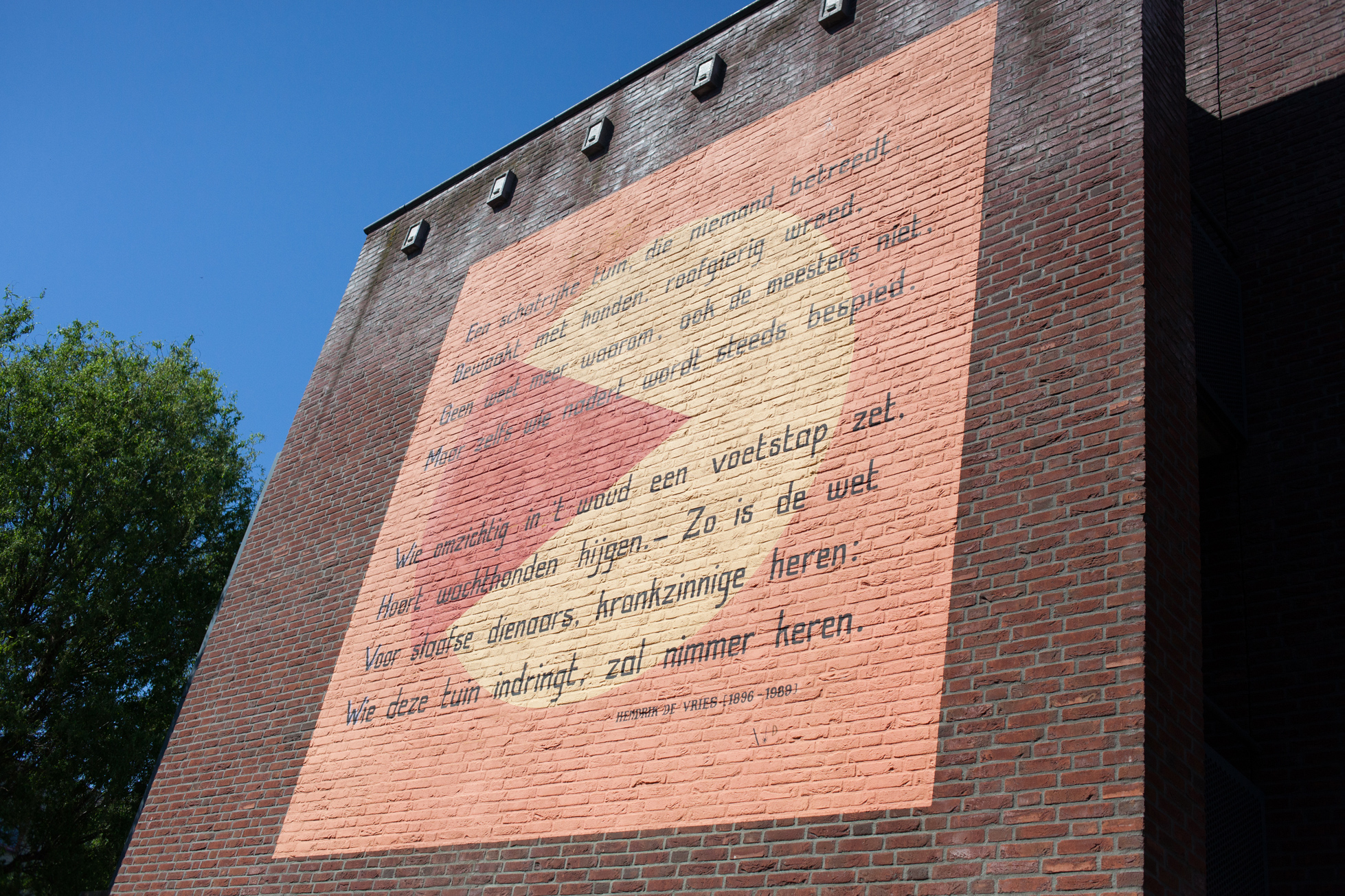 This wall poem was unveiled on 28 June 2000. It was the 78th wall poem realized by the TEGEN-BEELD Foundation in Leiden. Back then, it could be seen on the wall of Aloëlaan 41. That building was on the list to be demolished: the municipality wanted to build 24 eco-houses there. The community rose up and let this poem be painted as a ‘deterrent’. However, not everyone agreed: the matter divided the neighborhood. The municipality pursued their idea: the inhabitants had to vacate the house and after the house was put out of order to repel squatters, it was ultimately demolished during the summer of 2001. And so was the wall poem, but in 2006, it was painted again. With this, the poem reappeared in the Aloëlaan, in a new design. It now seems to be inspired by the computer game Pac-Man. Previously, the poem made the reader think of the sun. 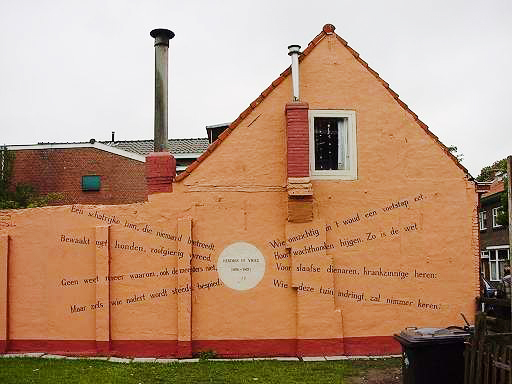 Whoever wants to start a fire only needs to dig: / Underneath the world a fire always smolders

A wealthy garden, impenetrable to all,
guarded by dogs, rapaciously brutal,
not even their masters remember why,
on everyone who even comes near they spy.

Whoever sets foot in the woods, careful,
hears guard dogs growl. Such is the rule
for slavish servant, insane sir:
who enters this garden, will never return.